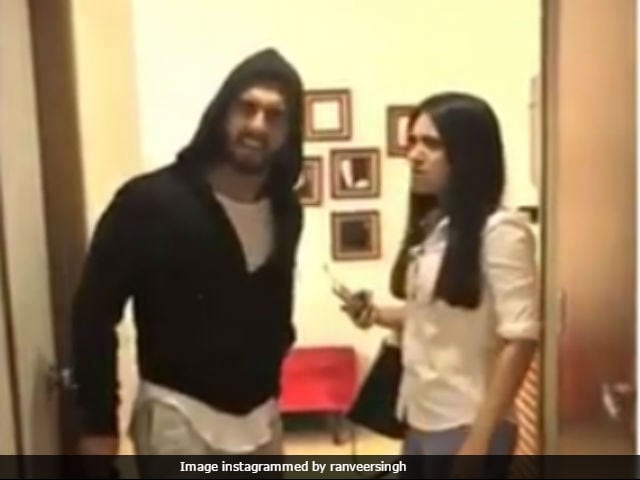 New Delhi: Akshay Kumar and Bhumi Pednekar's Toilet: Ek Prem Katha is all set to release on Friday and best wishes are pouring in from their colleagues and friends for the success of their film. Today, Varun Dhawan and Ranveer Singh shared hilarious videos on social media in support of Akshay's forthcoming film. In the video posted by the Badlapur actor, he is seen taking a loo break in between a grueling workout session. Varun tells his trainer, "Rohan, mujhe toilet jana hai" to which the latter refuses and says, "Nahi ja sakta bhai. Toilet, gyarah tareek ko release ho rahi hai. The video has been captioned as: "Teen din mein #toiletekpremkatha. Best of luck @akshaykumar sir and @psbhumi." The Khiladi actor had made a special appearance in Varun's Dishoom. His efforts were noticed by Akshay and Bhumi, who thanked the Main Tera Hero actor. "Bas thoda aur control Varun, #ToiletAaRahiHai in 3 days!," wrote the Holiday actor.

Meanwhile, Ranveer Singh also uploaded a hilarious video promoting the film. In the video, posted by the 32-year-old actor, Bhumi Pednekar is seen walking towards her room while speaking to a friend over the phone. As she enters, she realises that her washroom is occupied and she informs her friend, "I think mere bathroom mein koi hai." As she tries to figure out who it could be, the song Aha Aaja, Aha Ajaa from Teesri Manzil plays in the background and Ranveer Singh walks out of the loo. The startled actress questions him as to what he was doing inside the loo. Ranveer responds, "Woh kya hai na madam, desh mein toilets ki kami hai. Aur issi vishya par humaare favourite actor Akshay Kumar ne picture banai hai, Toilet: Ek Prem Katha jo release ho rahi hai August 11 ko."

See the videos shared by Varun and Ranveer Singh here:

When you gotta go, you GOTTA GO! #ToiletEkPremKatha this Friday! @akshaykumar @psbhumi

Toilet: Ek Prem Katha, which has been directed by Shree Narayan Singh, deals with the need of sanitization in the country and is based on Prime Minister Narendra Modi's Swacch Bharat campaign.

Akshay Kumar and Bhumi Pednekar are not only actively promoting their film on social media but they are also contributing to the ground work. The stars, in collaboration with Caya Constructs, unveiled 24 toilets in 24 hours across India. A video was posted by the 49-year-old actor on his Twitter account which read, "#24Hours24Toilets unveiled across India to join the fight against open defecation! #GoingODF @toiletthefilm @CayaConstructs."

#24Hours24Toilets unveiled across India to join the fight against open defecation! #GoingODF@toiletthefilm@CayaConstructspic.twitter.com/PBdLtrMVP1

The trailer of Toilet: Ek Prem Katha was unveiled by the makers of the film in June. It was highly appreciated by the film critics and Bollywood celebrities.

Promoted
Listen to the latest songs, only on JioSaavn.com
In May, Akshay Kumar and the team of Toilet: Ek Prem Katha met Prime Minister Narendra Modi and Railway Minister Suresh Prabhu and briefed them about their upcoming film.

Toilet: Ek Prem Katha will be releasing in theatres on August 11.