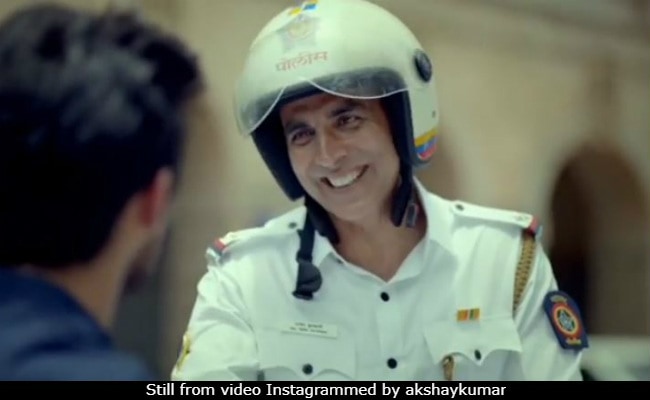 Guys, be extra alert while driving because you may just bump into Akshay Kumar, the viral traffic cop, round the wrong turn and then, there's no means to escape. The 50-year-old actor has set the Road Safety Week Campaign's theme "Sadak Suraksha Jeevan Raksha" trending after starring in a series of adverts as part of a road safety campaign. In three separate videos Instagrammed by Akshay Kumar, he can be seen plugging in the baap ka road concept. In the first video, Akshay, dressed as a traffic cop, pulls over a car which drives into a "No Entry" lane. Before handing out the challan, Akshay asks the driver if Bal Gangadhar Tilak is his father as the lane is named: "Lokmanya Tilak Road." He wraps the conversation by saying: "Aapke baap ka road nahi hai?" Lol.

In the second video, Akshay pulls over a jeep, the driver of which remained busy on his phone while driving and was (un)safely perched on the seat without the seat belt. Akshay asks if Dadabhai Naoroji was his father as the road is named Dadabhai Naoroji Marg. Lol. Double challan.

Last but not the least, in the third video Akshay forces a biker - with two others riding pillion and without helmet - to come to a halt only to ask if Hasyakalakar Mehmood Chowk is his baap ka road. Even if it would have been, Akshay would have drawn the same challan.

The three videos on Akshay's social media pages are posted with these messages:

"It is always better to be safe than sorry. Follow traffic rules for your own and others safety kyunki road kisi ke baap ki nahi hai."

It is always better to be safe than sorry. Follow traffic rules for your own and others safety kyunki road kisi ke baap ki nahi hai. #SadakSurakshaJeevanRaksha

Akshay Kumar will soon be seen in Independence Day release Gold, which is a fictional retelling of India's first gold win as a free nation in field hockey at the 1948 London Olympics.