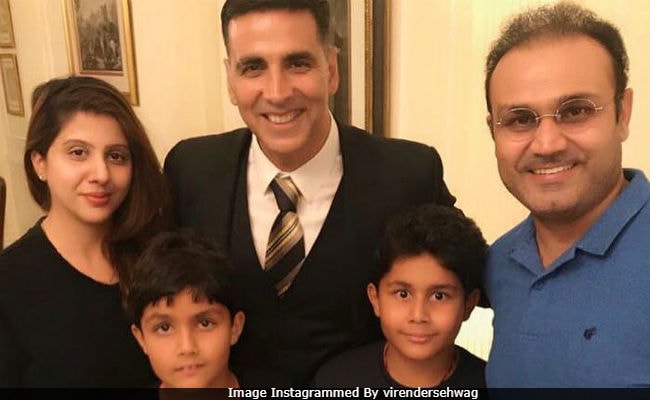 An early review of Akshay Kumar’s much-anticipated film Gold was posted by cricketer Virender Sehwag, who appeared to have watched the film over the weekend. Sehwag shared a picture of himself with wife Aarti and their sons, along with Gold star Akshay and wrote, “Totally sold on watching Gold. Wonderful, inspiring film. Thank you, Akshay Kumar.” In Gold, Akshay plays the role of a hockey coach Tapan Das, who trains team India to win its first gold medal as a free nation at 1948 Summer Olympics. Akshay and team Gold had reportedly screened the film for legendary hockey player Balbir Singh in Delhi on Sunday.

August 12 (Sunday) marked the 70th anniversary of Independent India’s first gold medal, which was won at the 1948 Olympics. Akshay shared a special video on social media to celebrate 70 years of the iconic moment. “Celebrate 70 years of free India’s first Gold by knowing how it feels by the history makers themselves,” he tweeted. The video features prominent sports personalities like Balbir Singh, Kapil Dev, Sachin Tendulkar, Abhinav Bindra and Sunil Chhetri.

Gold opens in theatres along with John Abraham's Satyameva Jayate.