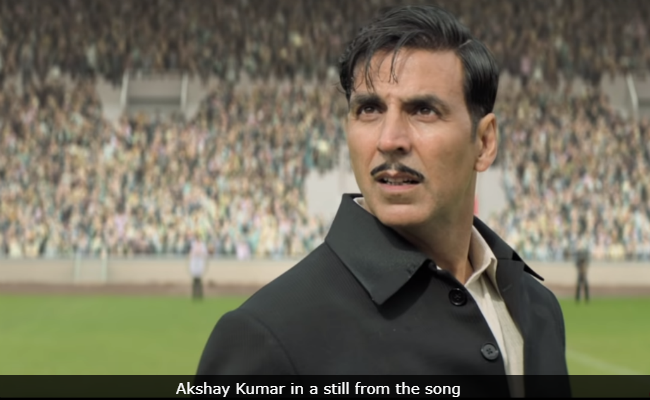 Akshay Kumar in a still from the song Ghar Layenge Gold. (Image courtesy:

After the immense popularity of the film's previous songs Naino Ne Baandhi and Chad Gayi Hai, the makers of Gold released another song track from the film on Wednesday. The power-packed song is titled Ghar Layenge Gold. Sung by Daler Mehndi, the song will definitely give the viewers goosebumps. The song has been composed by Sachin- Jigar and and the hard-hitting lyrics are by veteran lyricist Javed Akhtar. Akshay Kumar announced the song's release on social media and described the song as the "winning anthem of the year" and we couldn't have agreed more. The two and a half minute video gave us an insight into the inspirational journey of hockey coach Tapan Das (played by Akshay Kumar).

Last week, Gold's producer Farhan Akhtar thanked Daler Mehandi for singing the song and tweeted, "Always a pleasure to hear your voice and associate with your incredible talent.. Thank you for taking the chant of Ghar Layenge Gold to the audience."

.@dalermehndi Always a pleasure to hear your voice and associate with your incredible talent.. thank you for taking the chant of #GharLayengeGold to the audience.. https://t.co/wfjdmoGjFY

Gold is set against the backdrop of 1948 and it traces the journey of a hockey coach, who wishes to win an Olympic gold medal for independent India. The film has extensively been shot in UK and India. Gold marks the Bollywood debut of television actress Mouni Roy. It also features Vineet Kumar Singh, Amit Sadh and Kunal Kapoor and Sunny Kaushal in pivotal roles.

Directed by Reema Kagti, Gold is scheduled to release on August 15.