Akshay Kumar's Atrangi Re To Resume Filming In October

Atrangi Re, directed by Aanand L Rai and co-starring Dhanush and Sara Ali Khan, will begin its second schedule in October 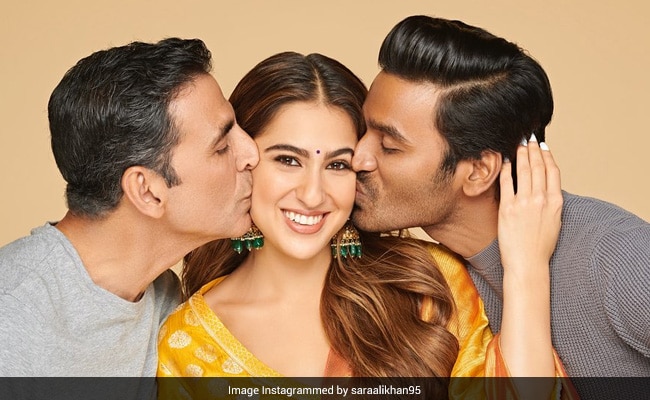 Dhanush, Akshay and Sara in an Atrangi Re poster (courtesy saraalikhan95)

An Akshay Kumar movie will resume shoot soon while another will begin filming, it was announced today. Atrangi Re, directed by Aanand L Rai and co-starring Dhanush and Sara Ali Khan, will begin its second schedule in October, revealed trade analyst Taran Adarsh. The shoot location will be Madurai. Akshay's other film Bell Bottom will start shooting in the UK, where the unit will travel to on a chartered flight. Safety precautions will be ensured, Mr Adarsh announced. It's not clear when Team Bell Bottom will fly out but the film is scheduled to release next April. Lara Dutta, Huma Qureshi and Vaani Kapoor co-star with Akshay Kumar.

Taran Adarsh made both announcements on Twitter - see his tweets here:

UPDATE... #AkshayKumar, #Dhanush and #SaraAliKhan... #AanandLRai to commence second shooting schedule of #AtrangiRe from Oct 2020 in #Madurai... Music by #ARRahman... Here's a glimpse from the film... pic.twitter.com/Eq2TEFD1Ra

Twitter is especially thrilled by the Atrangi Re announcement and is trending the film furiously. The film began and completed its first schedule in March before the nationwide lockdown. A masked Sara Ali Khan, the female lead, was spotted at director Aanand L Rai's office in Mumbai last month.

Sara, who may or may not be playing a double role in Atrangi Re, revealed in January that she had been cast in the film and was delighted. "I can't believe my luck," she wrote in a post on Instagram, "Blessed to be working with Aanand L Rai sir, in an AR Rahman musical. And so thankful to have Akshay Kumar Sir join hands with the extremely talented and incredibly humble Dhanush and myself."

Atrangi Re is meant to release on Valentine's Day - February 14 - next year. The film is just one of several in the super busy Akshay Kumar's lineup - apart from Atrangi Re and Bell Bottom, he plays the lead in a film on Prithviraj Chauhan. Akshay also has two films ready for release - Laxmmi Bomb will premiere on Disney+Hotstar while Sooryavanshi, directed by Rohit Shetty and co-starring Katrina Kaif, will release in cinemas on Diwali.