Sara Ali Khan greeted the paparazzi with a Namaste. 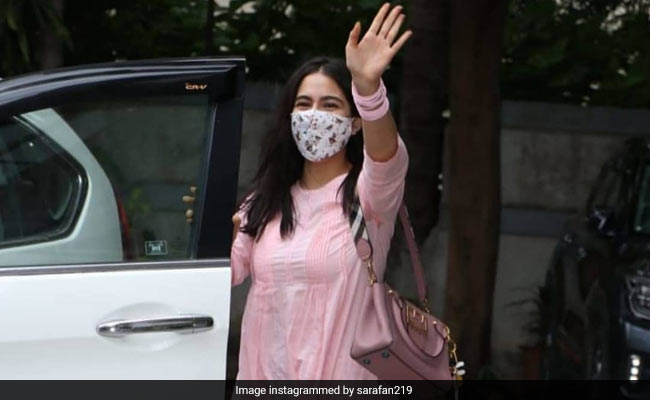 Sara Ali Khan, who frequently greets the paparazzi with a bright smile, did just that as she stepped out on Tuesday afternoon after a long time. Flashbulbs popped at the 24-year-old actress while she was photographed outside filmmaker Aanand L Rai's office in Mumbai. Sara was seen dressed in a soft pink kurta and a printed pair of pyjama. She accessorised her look with a matching handbag and bangles and was seen wearing a printed mask. For the uninitiated, Sara Ali Khan has signed a film titled Atrangi Re with Aanand L Rai. The film also stars Akshay Kumar and Dhanush.

Here are the pictures from Sara Ali Khan's day out:

Sara announced her association with the project in January this year and she wrote: "I can't believe my luck," on working with director Aanand L Rai, composer AR Rahman and stars Akshay and Dhanush. The Love Aaj Kal actress wrote: "Blessed to be working with Aanand L Rai sir, in an AR Rahman musical. And so thankful to have Akshay Kumar Sir join hands with the extremely talented and incredibly humble Dhanush and myself." Atrangi Re is being jointly presented by T Series, Colour Yellow Productions and Cape Of Good Films.

I can't believe my luck My next film ATRANGI RE Blessed to be working with @aanandlrai In an @arrahman musical And so thankful to have @akshaykumar sir join hands with the extremely talented and incredibly humble @dhanushkraja and myself Presented by @itsbhushankumar's @TSeries, @cypplofficial & #capeofgoodfilms And written by Himanshu Sharma Sir CANNOT WAIT TO STARTAnd cannot wait to come gain, on Valentine's Day 14th February 2021