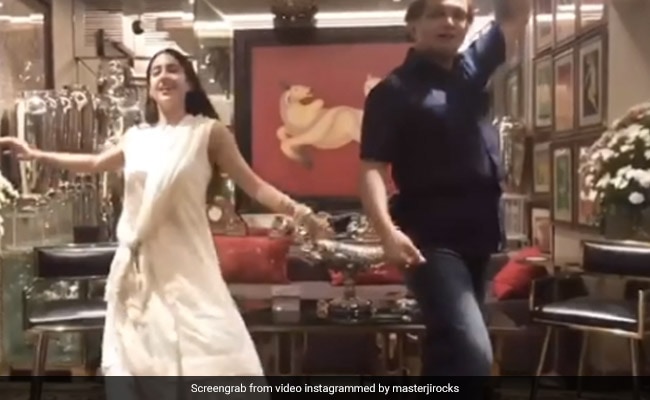 An old video of Sara Ali Khan, rehearsing to the song Saat Samundar, has been trending on the Internet - it was originally Instagrammed by choreographer Rajendra Singh in February. We remember Sara Ali Khan's performance to Saat Samundar from a high-profile wedding reception in 2018. The viral video appears to be from when Sara was rehearsing for her performance in 2018 as the choreography is the same. In the viral video, Sara, dressed in her usual favourite - white salwar kameez - can be seen picking up dance steps with occasional glances at the choreographer. Isn't Sara simply gracious, even when she's rehearsing?

Dancing on Saath samundar paar with my dearest and adorable @saraalikhan95. May you achieve more and more success always

Here's how Sara set the floor on fire at Saudamini Mattu (CEO of label Abu Jani-Sandeep Khosla) and Siddharth Bhandari's wedding reception in April 2018. Sara, who was yet to make her Bollywood debut, was every bit stunning in an Abu Jani-Sandeep Khosla saree. Other Bollywood celebs who joined Sara at the celebrations included the Bachchans. Shweta Bachchan also performed to Kaala Chashma while Karan Johar grooved to Radha.

Check out Karan Johar's moves.This has to be his favorite song #KaranJohar #radhaterichunri #filmychutzpah #kjo

Meanwhile, Sara Ali Khan loves to dance. Be it at a studio or on the streets of New York. She also loves to share glimpses of her dance sessions on Instagram. Here's proof.

Because Happy = Healthy So Happy World Health Day Stay motivated and positive- it's the only way Especially since for now, at home we must stay! #staysafe #stayhome #stayfit

dance edition Revisit any previous tradition Riyaaz, training, repetition It'll all come to fruition And of course- I must mention In this 'quarantime' any routine will help your condition #sarakishayari #QuarantineKiTayari #stayhome #staysafe

Sara's first Bollywood movie was Kedarnath, in which she featured in the foot-tapping number Sweetheart. Sara also won hearts for complementing Ranveer Singh in the song Aankh Marey from Simmba.

Last seen in Love Aaj Kal, Sara Ali Khan's next film is Coolie No 1, in which she co-stars with Varun Dhawan.