Akshay Kumar took his daughter to an amusement park yesterday 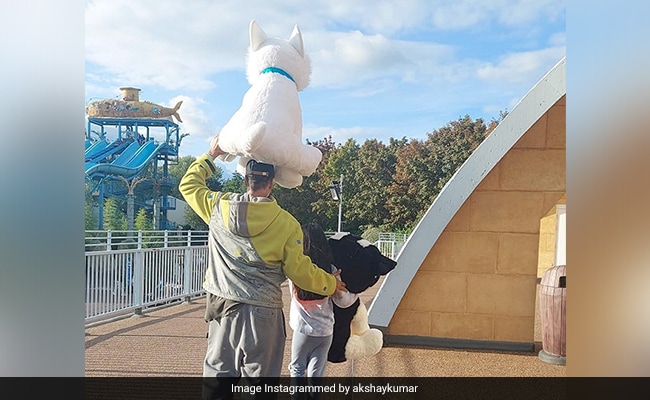 Akshay Kumar had a blast yesterday with his daughter Nitara at an amusement park, and his Instagram post stands as proof. On Wednesday, he shared a video and a picture that shows them walking with two huge stuffed toys. In the video, Akshay Kumar is carrying a soft toy on his head while his daughter is holding it in her hand. Calling it the "best day ever" he revealed in the caption that he felt like a "hero" after seeing a smile on his daughter's face on winning not one but two stuffed toys. He wrote, "Took my daughter to an amusement park yesterday. Looking at her happy smile on winning not one but two stuffed toys for her was hands down the closest I've felt to being a hero." He used the  #BestDayEver".

Soon after he shared the video, his fans flooded the comment section. A fan wrote, "Awww that's so sweet," followed by love-struck emoticons, while another wrote, "Wow so amazing".

Nitara is Akshay Kumar and Twinkle Khanna's youngest child. The couple is also parents to a son Aarav. On September 15, Twinkle celebrated Aarav's 20th birthday and shared an adorable picture of him surrounded by balloons and wrote a long note. Excerpts from the note read, "And he turns 20! It's hard enough raising them, but it's harder to finally let go. I am so proud of what this wonderful boy is building with his blocks." Check out the post below:

Coming back to Akshay Kumar, last he was seen in Cuttputlli. Next, he will be seen in Ram Setu and Selfiee.