"He is my big bro and can never be annoyed with me," tweeted Kapil Sharma 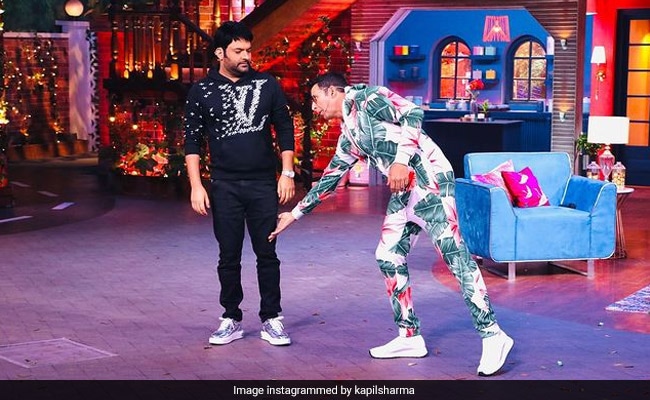 Kapil Sharma and Akshay Kaumar at the show. (courtesy: kapilsharma)

Just when it seemed as if Akshay Kumar was going to cancel an upcoming appearance on The Kapil Sharma Show, disaster has been averted. Kapil Sharma, host of the eponymous comedy series, announced in a tweet today that he had spoken to Akshay Kumar, all was now well and the actor would indeed be promoting new film Bachchan Pandey on The Kapil Sharma as scheduled. For those who don't know, Akshay Kumar reportedly took offence after a clip from a previous episode of The Kapil Sharma show he had shot was leaked online.

In his tweet, Kapil Sharma wrote: "Dear friends, was reading all the news in media about me and Akshay paji. I have just spoke to paji and sorted all this, it was just a miscommunication, all is well and very soon we are meeting to shoot Bachhan Pandey episode. He is my big bro and can never be annoyed with me, thank you."

Dear friends,was reading all the news in media about me n Akshay paji, I have jus spoke to paji n sorted all this, it was jus a miss communication, all is well n very soon we r meeting to shoot Bachhan pandey episode. He is my big bro n can never be annoyed with me thank you

On Monday, Hindustan Times reported that the Bachchan Pandey episode had been put on hold because Akshay Kumar refused to appear on The Kapil Sharma Show. It all began when Kapil Sharma referred to Akshay Kumar's interview with Prime Minister Narendra Modi; after filming the episode, Akshay reportedly asked the channel that airs The Kapil Sharma Show not to air the clip and they agreed. However, it was leaked online. "Akshay took all of Kapil's jokes head-on but the dig on the PM interview seemed to mock the dignity of such a high office. So Akshay requested the channel to not air that question. It is a right of the guests to make such a request as the show is not live. The channel agreed, but the said scene was leaked on the internet soon after. It was a breach of trust on the part of someone in Kapil's team, and Akshay sought a clarification before he appears on the show again," a source told Hindustan Times.

Damage control was clearly required and, per Kapil Sharma's tweet, has been achieved.

B Praak's Newborn Baby Dies At The Time Of Birth, Singer Shares An Emotional Note