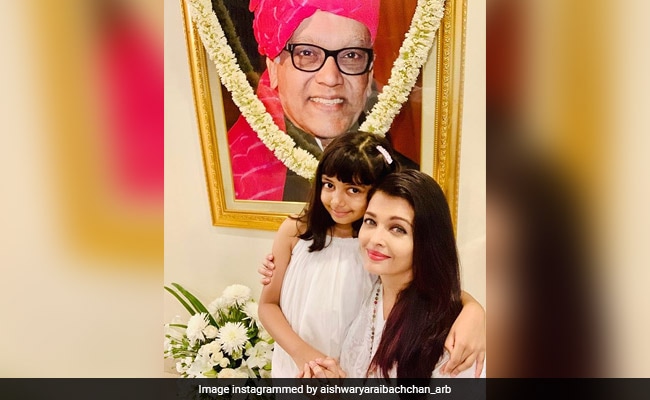 On her father Krishnaraj Rai's death anniversary, Aishwarya Rai Bachchan poured her heart out on social media. The actress, on Wednesday, shared a couple of photos of herself, her daughter Aaradhya, husband Abhishek Bachchan, mother Vrinda Rai and brother Aditya standing in front of a framed photo of Krishnaraj Rai. In one of her posts, in which she can be seen with Aaradhya, Aishwarya described her father as their "guardian angel" and wrote: "Love you our Daddy-Ajja, forever and beyond. Our guardian angel always." In another set of pictures, the actress can be seen posing with her mother, brother and actor husband in front of her father's photo.

Here's how Aishwarya remembered her father on his death anniversary:

A post shared by AishwaryaRaiBachchan (@aishwaryaraibachchan_arb) on Mar 18, 2020 at 11:11am PDT

A post shared by AishwaryaRaiBachchan (@aishwaryaraibachchan_arb) on Mar 18, 2020 at 6:55am PDT

Aishwarya Rai Bachchan often shares pictures of her father on social media. On Christmas last year, she posted a picture of herself and Aaradhya posing in front of Krishnaraj Rai's photo. Take a look:

A post shared by AishwaryaRaiBachchan (@aishwaryaraibachchan_arb) on Dec 25, 2019 at 6:58am PST

On her parents' marriage anniversary, she posted a throwback picture of her mother and father posing together for the camera and wrote: "Love you eternally and beyond always. Happy 50th anniversary, my golden angels."

A post shared by AishwaryaRaiBachchan (@aishwaryaraibachchan_arb) on Dec 22, 2019 at 3:40am PST

Krishnaraj Rai died in March 2017. His last rites were performed in Mumbai and later, a prayer meeting was organised. The Bachchans and several members of the film fraternity paid their last respects to Krishnaraj Rai.

On the work front, Aishwarya Rai Bachchan was last seen in the 2018 musical film Fanney Khan, co-starring Anil Kapoor and Rajkummar Rao. Her next project is Anurag Kashyap's Gulab Jamun, in which she will co-star with her husband Abhishek Bachchan.