Aishwarya posted a perfect family photo of the Bachchan trio 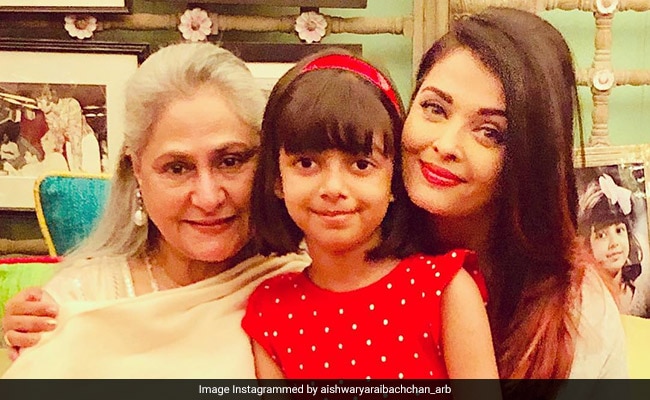 A late birthday wish is as good as an early one. On Tuesday, Jaya Bachchan's birthday began with an adorable wish from her daughter Shweta and ended on a sweet note, courtesy daughter-in-law Aishwarya Rai Bachchan. In her birthday greeting for Jaya Bachchan, Aishwarya wrote: "Happiness always". She picked a perfect family photo featuring herself, Jaya and Aaradhya Bachchan. In the photo, Aaradhya can be seen standing in between her mother Aishwarya and grandmother Jaya Bachchan. Aaradhya is cute as a button in a red frock while Jaya and Aishwarya are colour coordinated in cream. All of their happy faces will really make you smile.

Meanwhile, Aishwarya's Instafam can't get over how cute the photo is and posted comments like: "Cute family", "So cute baby", "Three cute stars in one frame", and "awesome." Take a look at Aishwarya's latest Instagram photo:

A post shared by AishwaryaRaiBachchan (@aishwaryaraibachchan_arb) on Apr 9, 2019 at 11:12am PDT

The word says it all. Happy Birthday Ma. Love you.

In the past, Jaya Bachchan has made only a few appearances on Aishwarya's Instagram. Here's one from Aaradhya's 7th birthday party in which along with Jaya Bachchan, Amitabh Bachchan and Abhishek Bachchan are also to be seen in the frame.

A post shared by AishwaryaRaiBachchan (@aishwaryaraibachchan_arb) on Nov 16, 2018 at 10:26am PST

The Bachchan family celebrated Jaya Bachchan's 71st birthday with a dinner at a suburban Mumbai restaurant on Tuesday.