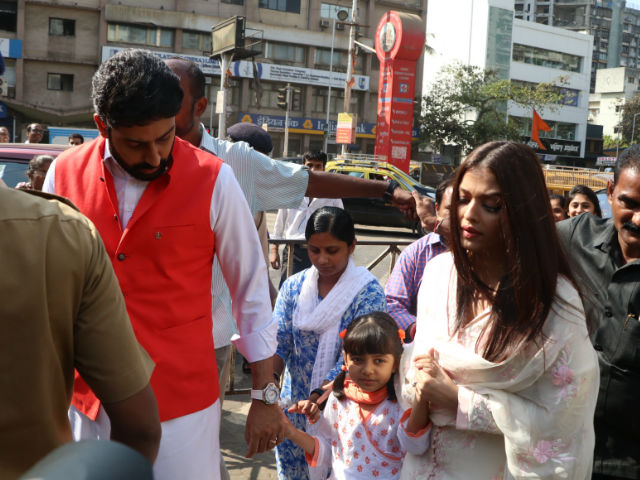 New Delhi: Actor couple Aishwarya Rai and Abhishek Bachchan visited the Siddhivinayak Temple in Mumbai on their 10th wedding anniversary today. Their daughter Aaradhya also accompanied them. Aishwarya, 43, was dressed in a white suit while Abhishek, 41, added a bright red jawahar jacket to his kurta pyjama look. Aaradhya wore a white suit with red embroidery - matching with both her parents' outfits. The trio navigated their way through the paparazzi amid tight security. Abhishek, son of actor couple Jaya and Amitabh Bachchan, thanked his fans for best wished in a tweet and said: "And just like that it's been 10 years." 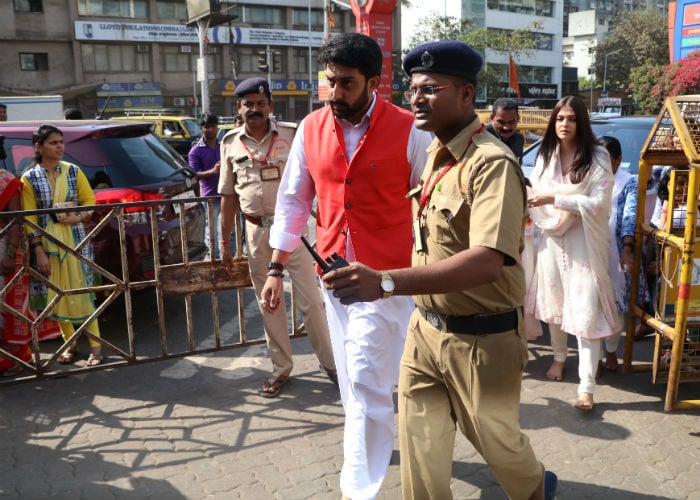 Aishwarya, Abhishek and Aaradhya at the Siddhivinayak temple in Mumbai 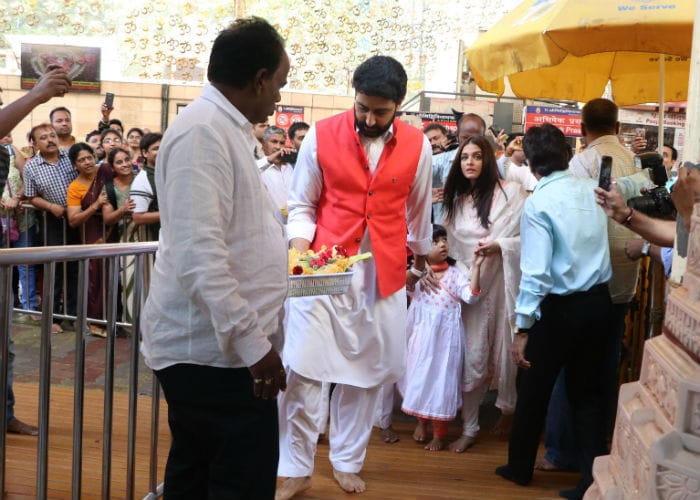 Abhi-Ash and Aaradhya were colour coordinated

And just like that.... It's been 10 years! Thank you all for the wishes for Aishwarya and I. Lots of love.

Aishwarya Rai and Abhishek got married on April 20, 2007 and the couple has a five-year-old daughter, Aaradhya. Aishwara and Abhishek have co-starred in films like Guru and Raavan. They first worked together in 2000 film Dhai Akshar Prem Ke and later collaborated for Kuch Na Kaho in 2003 and Umrao Jaan in 2006.

Aishwarya Rai also featured in a song (Kajrare) in Abhishek Bachchan's Bunty Aur Babli. After they got married, Abhishek and Aishwarya collaborated in Raavan and Sarkaar Raj. They've also co-starred in Dhoom 2, in which Aishwarya was cast opposite Hrithik Roshan.

Promoted
Listen to the latest songs, only on JioSaavn.com
Aishwarya Rai took a sabbatical of sorts after 2010 film Guzaarish and returned to the big screen five years later in Sanjay Gupta's Jazbaa and followed it up with Omung Kumar's Sarbjit. She was last seen in Ae Dil Hai Mushkil with Ranbir Kapoor and Anushka Sharma. The film directed by Karan Johar was a commercial success.

Abhishek Bachchan was last seen in Housefull 3, co-starring Akshay Kumar and Riteish Deshmukh. He will be next seen in a film directed by Nishikant Kamat, who has made films like Madaari, Rocky Handsome and Drishyam.