Ahead Of The Zoya Factor's Release, Anand Ahuja Shares A Pic With His 'Lucky Charm' Sonam Kapoor

How cute is this picture of Anand Ahuja and Sonam Kapoor 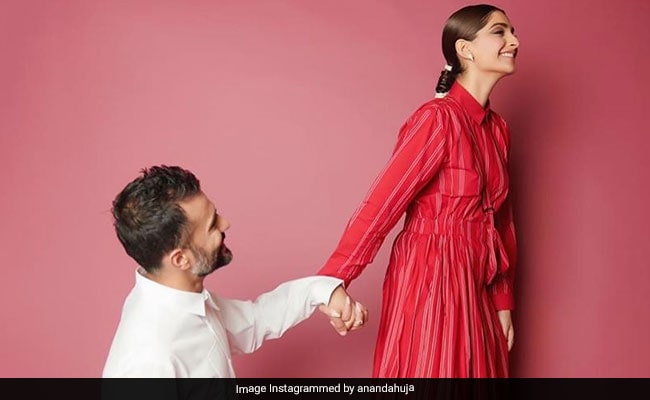 Anand Ahuja's "lucky charm" is (no points for guessing) his wife Sonam Kapoor. On Thursday night, the Bhane owner shared a stunning set of pictures on his Instagram profile, to reveal his lucky charm. In one of the pictures, Anand could be seen bending down on one knee and holding Sonam Kapoor's hand as she smiles with all her heart. Another picture was from the couple's wedding ceremony. In his post, Anand referred to Sonam Kapoor as his "girlfriend, best friend, wife" and "life partner." He wrote "Lucky charm" in bold letters. Take a look at the pictures first, you can thank us later.

A few days ago, during the promotional activities of The Zoya Factor, Sonam Kapoor told news agency PTI, "My husband is my lucky mascot." Sonam Kapoor and Anand Ahuja got married in May last year, after dating for several years. Anand, an entrepreneur, runs the fashion label Bhane and the sneaker boutique VegNonVeg.

As a part of her film's promotional activity, Sonam Kapoor has been sharing videos of Bollywood stars, in which they can be seen talking about their lucky charms and superstitions. As of now, Janhvi Kapoor, Arjun Kapoor, Twinkle Khanna, Karan Johar, Ranbir Kapoor and Alia Bhatt among other stars have shared their videos.

Sonam Kapoor awaits the release of The Zoya Factor, which opens in theatres on Friday. The film also stars Dulquer Salmaan, Angad Bedi, Sikandar Kher and Sanjay Kapoor. The film is based on Anuja Chauhan's novel of the same name. Sonam Kapoor plays the role of an advertising agency executive who is believed to be the lucky charm for the Indian cricket team, in the film.