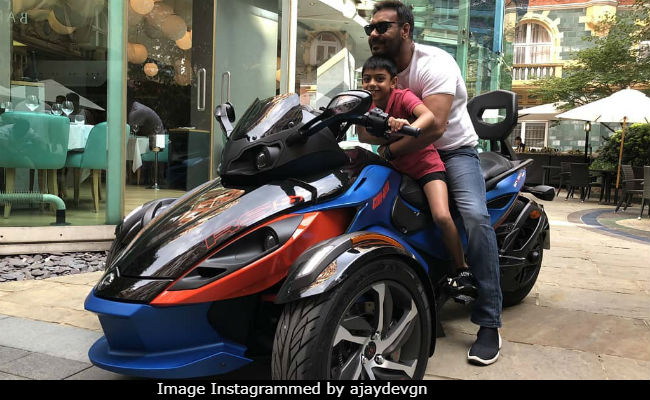 While Kajol is busy with her own list of commitments in London, the "biker boys" are having the time of their lives! Remember the viral fitness challenge video starring Yug Devgn shared on Ajay Devgn's Instagram? On Wednesday, Ajay and Kajol's seven-year-old son made another appearance on the 49-year-old actor's Instagram. In the photo Instagrammed by Ajay Devgn from London, the junior Devgn can be seen riding an ATV (a four wheeler bike), the caption of which reads: "Biker boys!" Yug's feet can barely touch the ground but looks like dad Ajay Devgn got his back. Ajay and Kajol are currently in the British capital with Yug and are posting constant updates on Instagram.

Here's what the father-son duo were up to in London:

In the same interview to IANS, Kajol said she believes in maintaining a disciplined routine for the kids: "I pamper my kids but there are always limits to it. I am very conscious about the rules and their daily routine of sleep and food timing, so he is definitely the one who pampers the kids."

Meanwhile in May, Yug stunned Ajay Devgn's Instafam as he featured in a fitness video shared by his actor-father. We bet you won't be able to watch this just once.

On the work front, Kajol will be next seen in Eela while Ajay Devgn's line-up has Total Dhamaal, Sons Of Sardaar and a film with Tabu.