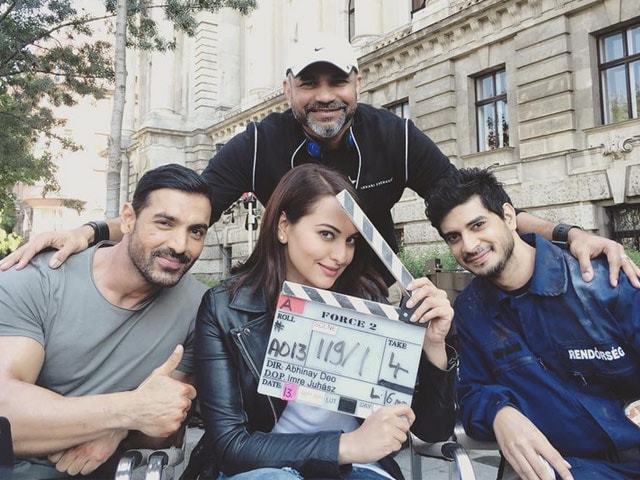 New Delhi: The Budapest schedule of the Abhinay Deo-directed Force 2, starring John Abraham and Sonakshi Sinha, has reportedly been hit by the refugee crisis in Europe and the Middle East. Filming in the Hungarian capital will wrap by October 22 but mid-day reports that it has been no easy task.

A source told mid-day, "The current environment of Budapest where the unit of the film is based has generated a political discussion with the Syrian War refugees attempting to enter the region through Hungary and Germany. The mahurat shoot was slated for September 6, but producer Vipul Shah asked the team to put it off until September 12."

Bollywood has previously filmed movies like Aks and Hum Dil De Chuke Sanam in Budapest and Team Force 2 didn't want a location change. "Many Hollywood films have been shot in Budapest and the makers of this film had also zeroed in on an interesting place in the city to kick off the first schedule," added mid-day's source.

The film's spokesperson said, "The unit had to delay the mahurat by a few days due to political turmoil in the capital (of Hungary). The team has kicked off the shoot now and is running on schedule."

Once begun, however, filming appears to have been trouble-free. Actors Sonakshi Sinha and Tahir Raj Bhasin have been documenting their time in Budapest on Twitter. (Also Read: Sonakshi Sinha Leaves For Budapest to Film Force 2)

Driving all around the city for shoot today! I love exploring new places while at work... Makes work like play! #lovemyjob#Budapest

Look at that beauty (behind me) #budapest #architecture #heritagebuilding #shootshennanigans

Tahir Raj Bhasin, who made his Bollywood debut in Mardaani, also reported from the sets:

Morning in Budapest! Waiting with @TheJohnAbraham & @sonakshisinha for shot to be set up. #YouSeeWhatISee#Force2pic.twitter.com/eowlEPLTTK

Behind the scenes madness. Budapest Sunday 5ams. With @sonakshisinha@TheJohnAbraham #Force2#TravelDiariespic.twitter.com/iNvg0nREDt

Tried to capture the enchanting Chain bridge in this selfie on my way to set. #YouSeeWhatISee#Force2#TravelDiariespic.twitter.com/gfn0wbWDkA

Sore from this gym session. The honour of training with this guy! @thejohnabraham #Budapest#TravelDiaries#Force2pic.twitter.com/skxgGJv6mx

Force 2 is a sequel to Nishikant Kamat's 2011 film Force.

Meanwhile, Tom Hanks' Inferno was also shot in Budapest some months ago. The film, based on Dan Brown's novel in The Da Vinci Code series, also stars Irrfan Khan and Felicity Jones in pivotal roles and the cast took a break from filming to watch Irrfan's monster movie Jurassic World last June.

In the theatre to watch Jurrassic world with inferno team in Budapest. pic.twitter.com/XLLq4f3DNi

It's a wrap time #InfernoMovie last day with FelicityJones pic.twitter.com/j05obrR7rD