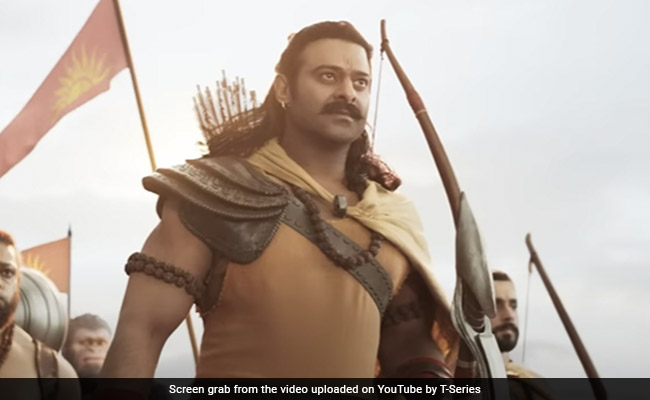 The teaser of Adipurush, starring Prabhas in the lead role, released last night and it is trending big time even hours later. The teaser begins with a shot of Prabhas meditating underwater. It then transitions to a scene where the actor says that he is here to "destroy injustice." Enter Saif Ali Khan (with 10 heads), who represents the dark forces. We also get a glimpse of Kriti Sanon in a stunning visual. Adipurush is based on "India's timeless epic" Ramayan, where Prabhas plays the role of Raghava, Kriti plays the role of Janaki, Saif is seen in the role of Lankesh and Sunny Singh plays the character of Lakshman.

The film's lead actor Prabhas shared the film's teaser and he wrote: "Coming to destroy the injustice. Step into the word of Adipurush."

This is what he posted:

The film's grand teaser launch was held in Ayodhya last night. "Arambh. Join us as we embark on a magical journey on the Sarayu River Bank in Ayodhya, UP," Prabhas  wrote before sharing the film's teaser.

Adipurush, starring Prabhas, Kriti Sanon, Saif Ali Khan and Sunny Singh, will release in Hindi, Tamil, Telugu, Kannada and Malayalam in theatres this year. The film was slated to release on August 11 this year. However, the makers shifted its release date to avoid clash with Aamir Khan's Laal Singh Chaddha, for which the actor thanked the makers of Aadipurush. It has been directed by Om Raut.

Adipurush, produced by T-Series Films, will release in Hindi, Tamil, Telugu, Kannada and Malayalam on 12 January 2023.