The actress recently visited a lavender and sunflower farm in Ickleford, England, with her family 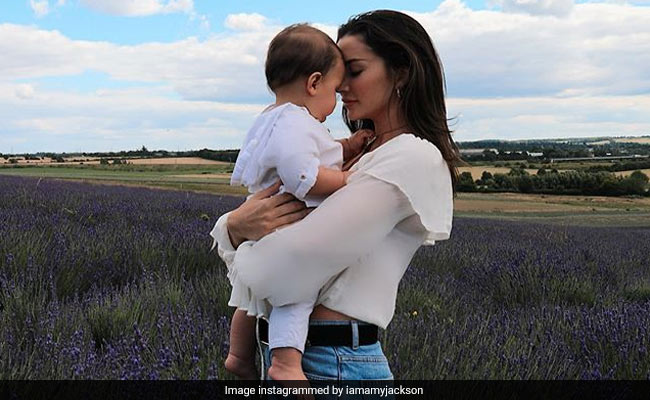 Amy Jackson's latest post on Instagram will make you go aww. The actress, who recently visited a lavender and sunflower farm in Ickleford, England, shared postcard-worthy pictures from her family trip on her Instagram profile and we can't even. The super-cute pictures feature Amy Jackson's fiance George Panayiotou and their son Andreas enjoying the scenic beauty of the Hitchin lavender farm. In one of the photos, Amy can be seen holding her son in her arms while in another, she can be seen having a hearty laugh with George and Andreas. Sharing pictures from the farm, Amy wrote: "Lavender everything please, thank you." Take a look at her post.

Recently, on Father's Day, Amy Jackson shared never-seen-before pictures of George Panayiotou and Andreas and stole the hearts of her fans. "The best chapter yet. Thank you for being such a loving, protective daddy to our little boy. Happy Father's Day," she wrote for George. Here's the post we are talking about:

The best chapter yet Thankyou for being such a loving, protective Daddy to our little boy. Happy Fathers Day.

Amy Jackson made her acting debut with 2010 Tamil movie Madrasapattinam and went on to feature in several Telugu and Kannada projects such as Yevadu (which also starred Ram Charan and Shruti Haasan) and The Villain (which starred Kichcha Sudeep in the lead role). Singh Is Bliing and Ekk Deewana Tha are some of the Bollywood movies that the actress has starred in. Amy was last seen in 2.0, co-starring Rajinikanth and Akshay Kumar, with whom she's shared screen space before in Singh Is Bliing. Amy Jackson has not announced her next project yet.