"Frolicking," wrote Amy in the caption 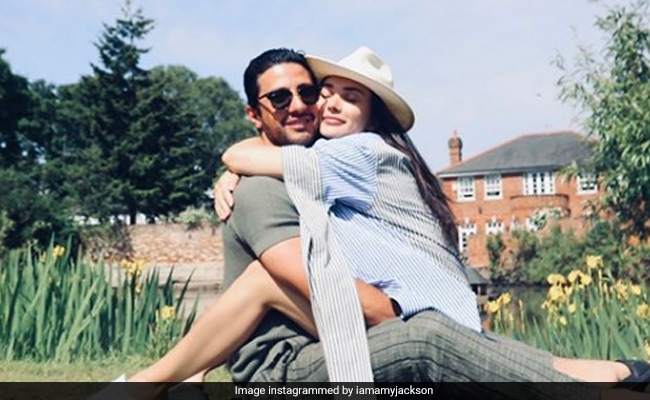 We got a glimpse of Amy Jackson's fiance George Panayiotou after a long time on her Instagram. The actress, who is currently living with George and their 8-month-old baby boy Andreas, shared pictures of herself "frolicking" with her fiancé on Instagram on Wednesday and sent the Internet into a tizzy. In one of the photos, Amy can be seen sitting on George Panayiotou's lap while adorably posing for the camera while the other features the duo in a loved-up moment. Sharing the photos, Amy just used one word to describe them. She wrote: "Frolicking." Check out her post here (swipe left for more photos):

Amy Jackson has been filling her lockdown diaries with adorable pictures of her son. We have handpicked a few for you. Take a look:

And just like that, my little bunny turned 8 months old

Days like this... covered in coconut sun cream & overloaded with cuddles. Perfection.

My happy lil bunny's first Easter! Sending all our love to you

Amy Jackson and George Panayiotou welcomed their first child Andreas on September 23 last year. The actress made the baby announcement by sharing a picture of the family of three: "Our Angel, welcome to the world Andreas."

Our Angel, welcome to the world Andreas

Amy Jackson made her acting debut with 2010 Tamil movie Madrasapattinam and went on to feature in several Telugu and Kannada projects such as Yevadu (which also starred Ram Charan and Shruti Haasan) and The Villain (which starred Kichcha Sudeep in the lead role). Singh Is Bliing and Ekk Deewana Tha are some of the Bollywood movies that the actress has starred in. Amy was last seen in 2.0, co-starring Rajinikanth and Akshay Kumar, with whom she's shared screen space before in Singh Is Bliing.