Aaradhya, Aishwarya, Navya: The Bachchans Light Up The Internet With Family Pic 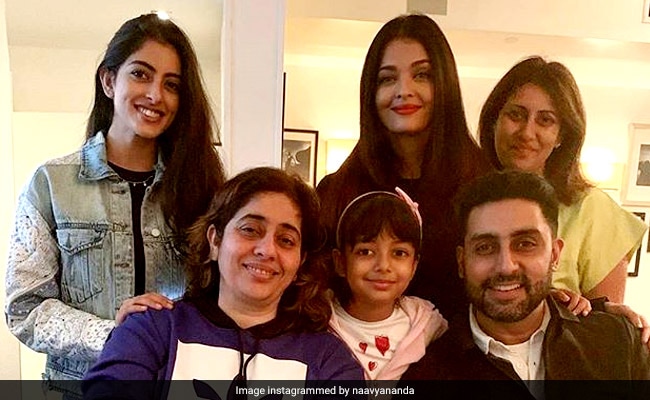 Our Thursday couldn't get any better as we chanced upon a famjam picture of Bollywood's most celebrated family. Yes, we are talking about the Bachchans, who recently found a spot on the list of trends on Thursday after a family picture shared by a fanclub dedicated to Navya Naveli Nanda surfaced on the Internet. The adorable photo features Aishwarya Rai Bachchan, Abhishek Bachchan, their daughter Aaradhya, Navya and her aunt Nitasha Nanda along with one other family member. However, it is Aaradhya's million dollar smile, which is winning hearts on social media. In the picture, Aishwarya and Abhishek can also be seen twinning in black outfits while Navya opted for all-denim look. Abhishek and Aishwarya are reportedly holidaying with Aaradhya in New York. Navya Naveli is Shweta Bachchan Nanda and Nikhil Nanda's daughter.

But first, take a look at the picture:

A few days ago, the same fanpage shared a video of Navya working out on the streets of New York. Navya, who is reportedly studying at New York's Fordham University, can be seen dressed in a neon green tank top and a pair of grey tights in the video.

Meanwhile, on the work front, Aishwayra Rai Bachchan will share screen space with husband Abhishek in Anurag Kashyap-directed Gulab Jamun. However, no other information about the film has been released yet. Also, on the sidelines of Cannes Film Festival, Aishwarya confirmed that she will be working in Mani Ratnam's next film.

On the other hand, Abhishek Bachchan, who was last seen in Anurag Kashyap's Manmarziyaan, will reportedly work with Rani Mukerji in the sequel of the 2005 hit film Bunty Aur Babli. The duo were also main leads in the original film.