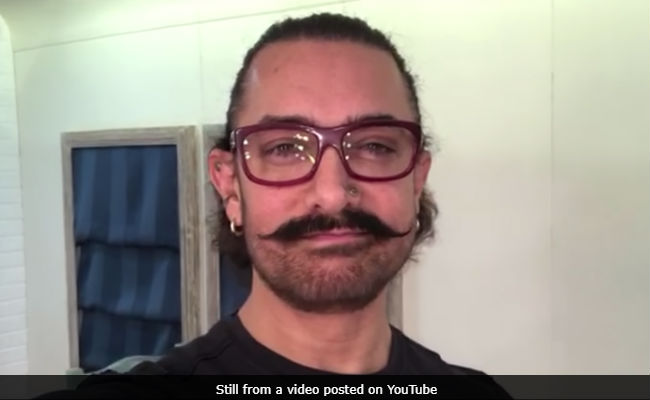 Aamir Khan from a studio in Mumbai. (Image courtesy: YouTube)

New Delhi: Everyone knows how Aamir Khan pays attention to the minutest details when he gets into a character for any of his projects - well, that's his hichki, which he's still trying to overcome. As part of the promotions of Rani Mukerji's Hichki, Aamir Khan told Yash Raj Films (the producers) that his "obsessive personality" is his biggest (and still active) hiccup. "My biggest Hichki is my obsessive personality. I get obsessed with anything that I do. I am still dealing with this Hichki and my struggle to overcome it continues," Aamir Khan said, adding that he hopes to 'improve' after having watched Rani's film.

Aamir Khan tweeted his review of Hichki on Thursday. He cheered the team and said that Hichki was "one of the most enjoyable films in a long time."

Aamir Khan is currently making Thugs Of Hindostan with YRF and the actor has made several films with Rani Mukerji - Ghulam, Mangal Pandey and Talaash. Aamir Khan is the latest celebrities to join the ranks of those who've promoted Hichki for Rani Mukerji.

It all started with Shah Rukh Khan, who said that the loss of his parents was his 'biggest Hichki moment' and he overcame it by channeling his grief into his profession. "The loneliness, pain and sadness of the loss of both my parents, could have been overwhelming enough to take over my life wholly. I decided to overcome this 'Hichki moment' by letting acting fill up my entire life," Shah Rukh had said. Shah Rukh and YRF have collaborated on several projects such as Dilwale Dulhania Le Jayenge, Rab Ne Bana Di Jodi and Jab Tak Hai Jaan.

On Thursday, Salman Khan revealed that his Hichki moment was the time when he took his work casually. "I used to take my work very casually. Now, that has changed as I take my work with seriousness and sincerity now," said Salman Khan, who has featured in YRF projects such as Tiger Zinda Hai and Sultan.

Several other celebrities such as Varun Dhawan, Anil Kapoor and Katrina Kaif also shared their hichkis with their fans.

Hichki is the story of an aspiring teacher with Tourette Syndrome and how she overcomes her hiccups to help her students overcome their hichkis. The Siddharth P Malhotra-directed film opened in theatres today.
Comments
aamir khanhichkirani mukerji hichki promotion