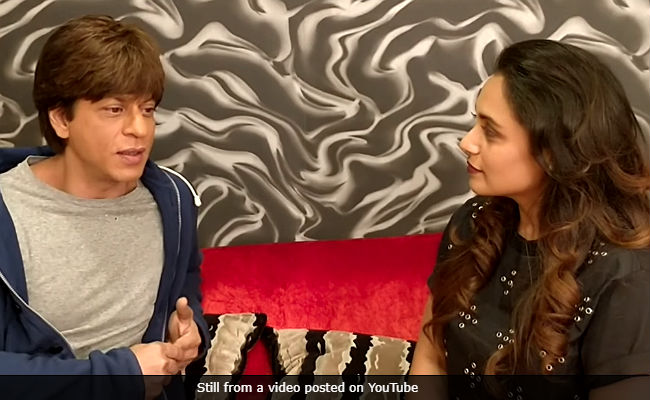 New Delhi: Shah Rukh Khan opened up about the loss of his parents, which the actor said was his 'greatest Hichki moment,' in a conversation with Rani Mukerji, who is currently promoting her new film Hichki. The makers are promoting Hichki by asking celebrities to share their 'Hichki moment' and how they overcame it and first up was Shah Rukh Khan. The 52-year-old actor told Rani Mukerji that he overcame his 'Hichki moment' by "letting acting fill up my entire life." The Darr actor said: "People close to me will tell you that acting is my vent, my window of manifesting these overwhelming emotions."

Shah Rukh Khan said: "My greatest 'Hichki moment' is the death of my parents. I was 15 when my father passed away and 26 when my mother passed away. It was very sad for us. The empty house without my parents used to come to bite us (my sister and me). The loneliness, pain and sadness of the loss of both my parents, could have been overwhelming enough to take over my life wholly. I decided to overcome this Hichki moment by letting acting fill up my entire life."

Shah Rukh Khan starred in television shows such as Fauji and Circus before he made his Bollywood debut in Deewana, co-starring Rishi Kapoor and Divya Bharti. In the Nineties, he featured in successful films such as Darr, Baazigar, Dilwale Dulhania Le Jayenge and Karan Arjun among others.

Shah Rukh told Rani: "I always say this that one morning, when I wake up, I will realise that I have spent all these emotions and now have nothing more to give (as an actor). Otherwise, death is a hiccup from which there is no coming back. I realised that and therefore, overcame it by giving my work, my all." Shah Rukh also added that that "God will also give you multiple ways to deal with it (hiccups) in this lifetime."

Shah Rukh Khan will be next seen in Zero, co-starring Anushka Sharma and Karina Kaif. Rani Mukerji also has a cameo in the Aanand L rai-directed film. Rani Mukerji's Hichki is directed by Siddharth P Malhotra and it open in theatres on March 23.