Aamir Khan's 'Fanney Khan Keeps Changing,' But Anil Kapoor Is One For Sure

Fanney Khan: "When I heard the title of your film, I thought yes, that's you. Fanney Khan of the industry," Aamir Khan told Anil Kapoor 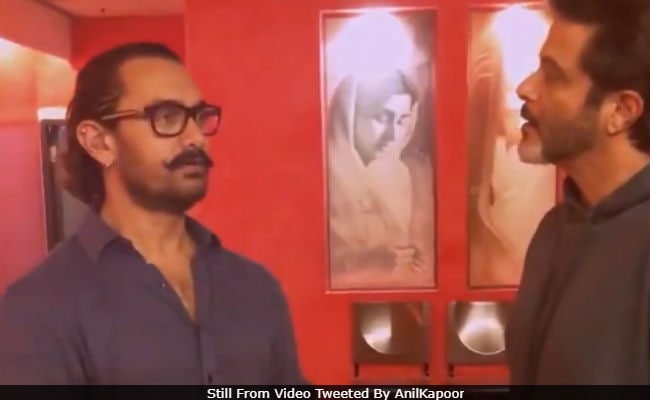 "Yeah, my Fanney Khan keeps changing. Jab main Wimbledon dekhta hun toh Roger Federer mera Fanney Khan bann jata hai. But I'm frankly telling you, for me you are my Fanney Khan," Aamir Khan told Anil Kapoor, who is actively promoting his film Fanney Khan, scheduled to release this Friday. As a part of promotions, Anil Kapoor is interviewing several celebs from the industry to know about their inspiration IRL. "The kind of energy you execute, the never-say-die attitude, the spirit that you have. No matter which role you are playing, no matter which character you are in. When I heard the title of your film, I thought yes, that's you. Fanney Khan of the industry," Aamir Khan added.

The video was posted by Anil Kapoor on Twitter, in which he wrote, "Everybody knows that he leaves no stone unturned when it comes to the roles he has to portray simply to entertain the audiences. For me, Aamir Khan you are truly a Fanney Khan."

Everybody knows that he leaves no stone unturned when it comes to the roles he has to portray simply to entertain the audiences. For me @aamir_khan you are truly a #FanneyKhanpic.twitter.com/VFBL0MVig8

Earlier in the day, Anil Kapoor interviewed Shah Rukh Khan, who watched the film on Wednesday night. SRK said that Anil Kapoor had encouraged him when he was a struggling actor. "I love you because you are my Fanney Khan," said Shah Rukh Khan.

He is truly one of the kindest actor's you will ever meet. That very quality of his makes @iamsrk a #FanneyKhan in my eyes. Thank you for the person that you are and for always being so supportive. pic.twitter.com/rLVOhYq2kC

Anil Kapoor's Fanney Khan also stars Aishwarya Rai Bachchan, Rajkummar Rao and Pihu Sand in key roles. The film is directed by Atul Manjrekar. Fanney Khan tracks the story of a father, who is a failed musician but he wants his daughter to become a successful singer.