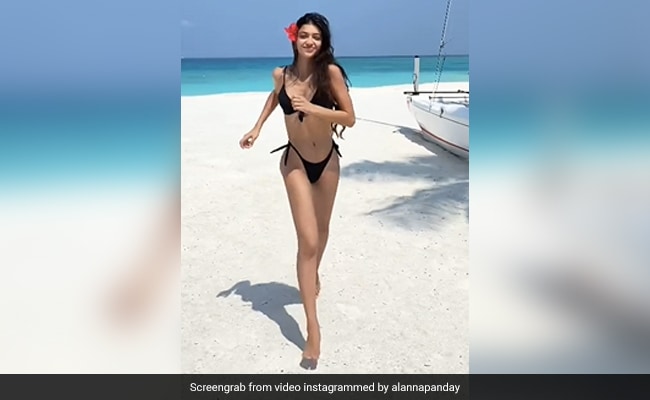 Alanna Panday, on Tuesday, gave her fans a sneak peek into her beach date with boyfriend Ivor. The video is from Alanna and Ivor's Maldives vacation and it is everything stunning. In the clip, Alanna Panday looks mesmerising in a black bikini. She let her hair loose and styled them with a red flower. She can be seen running towards Ivor and then taking a stroll on the beach with him in the clip. Alanna accompanied the video with just a red heart icon because, no caption needed. In the comments section, actress Aditi Bhatia wrote: "Too pretty" while Alanna's mother Deanne commented: "My mermaid princess." Take a look:

Remember when Alanna Panday and Ivor enjoyed breakfast with a breathtaking view in the Maldives? If not, see this post here:

Alanna Panday lives in Los Angeles with Ivor McCray. The model often posts pictures of herself in bikinis, for which she has been slut-shamed many times on Instagram. Last year, in an Instagram post, she wrote about being body-shamed on social media: "I wish I had spoken about it sooner, but waking up and reading things like this just became normal to me - it's an everyday part of my life... What's worse than waking up to hateful comments about my body every day, is that it comes from other women."

Alanna Panday trended big time on social media last month after she revealed how mom Deanne Pandey and dad Chikki Panday (actor Chunky Panday's cousin) reacted when she moved in with Ivor. "They were so happy. I remember telling my mom first that we are getting a house and she was absolutely ecstatic...Parents are super open-minded about everything. Not just about living with Ivor, I think my parents are super open-minded in general. So, there was no convincing. I just called them one day and said: 'Hey guys, this is the guy. I love him. We are staying together'," she said.