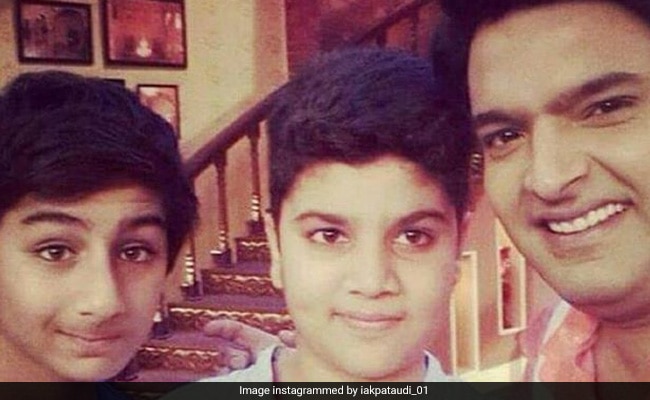 Ibrahim with a friend and Kapil Sharma. (Image courtesy: iakpataudi_01)

Comedian Kapil Sharma, who often features on the list of trends, found a new companion - Ibrahim Ali Khan. The reason? A rare throwback picture of the duo, which has been doing the rounds on social media. The aforementioned photograph appears to be taken on the sets of the popular comedy show Comedy Nights With Kapil, which ran on television from 2013 to 2016. The picture also features a friend of Ibrahim. In the picture, which has been shared by several fan clubs on Instagram, the trio can be seen happily posing for the camera.

Ibrahim Ali Khan is Bollywood actor Saif Ali Khan's son with his first wife Amrita Singh. He frequently features on his sister Sara Ali Khan's Instagram profile. A few days ago, Sara shared a goofy video on Instagram with a classic knock-knock joke. This is the video we are referring to:

Last month, Ibrahim trended big time for his post, in which he wrote: "Quarantine was so boring, had to escape." Check it out:

Quarantine was so boring had to escape

Ibrahim's sister Sara has featured in a couple of films such as Kedarnath, Simmba and Love Aaj Kal.. She will next be seen in Coolie No 1 (opposite Varun Dhawan) and Atrangi Re, alongside Akshay Kumar and Dhanush.

Meanwhile, Kapil Sharma is currently seen hosting the television talk show The Kapil Sharma Show. He made his debut in the TV industry with The Great Indian Laughter Challenge (season 3). He stepped into Bollywood with the 2015 film Kis Kisko Pyaar Karoon.