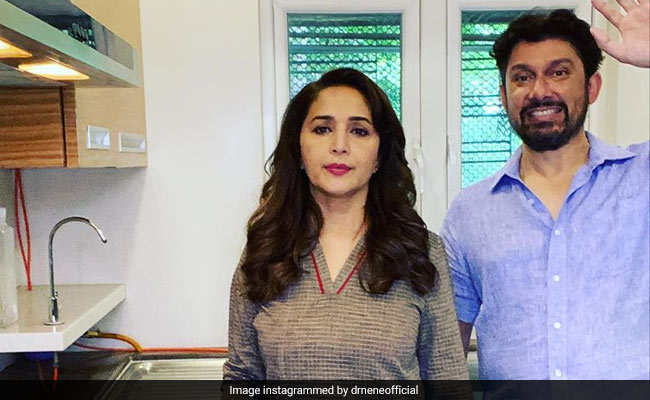 Madhuri Dixit and her husband Shriram Nene are busy working on their culinary skills and their Instagram posts prove that. On Tuesday, Shriram Nene posted a picture of himself along with the actress from their kitchen and he captioned it: "All's good when you are cooking together." In the comments section, Madhuri Dixit's fans wrote remarks like "It must be the best dish ever" and "you guys are couple goals." Another curious fan asked, "What are you guys cooking?" Madhuri Dixit stays with her family in Mumbai. She married Shriram Nene in the year 1999 and the couple are parents to two sons - Arin and Raayan.

All good when you are cooking together!

The Sri Lankan cooking class we took last year has definitely come in handy during this lockdown Which cuisine do you guys enjoy the most? #ExperiencesOverThings

Madhuri Dixit, who completed 36 years in Bollywood, last month, will soon be making her debut in the digital world with Netflix's upcoming series, which will be produced by Karan Johar. The actress has previously collaborated with Netflix for a Marathi drama titled 15th August, which was her debut project as a producer.

In 2019, Madhuri Dixit made several onscreen appearances. She starred in films such as Kalank and Total Dhamaal. In the box office debacle Kalank, she co-starred with Alia Bhatt, Varun Dhawan, Sanjay Dutt, Sonakshi Sinha and Aditya Roy Kapur. In Total Dhamaal, Madhuri featured alongside Anil Kapoor, Ajay Devgn, Arshad Warsi and others. During the lockdown, she released her first single titled Candle.

Madhuri Dixit has delivered many hit films especially in the Eighties and the Nineties. She is best-known for her performances in films such as Beta, Tezaab, Saajan, Hum Aapke Hain Koun..!, Dil To Pagal Hai and Devdas among many others.