Aaradhya and Samara stole the show with their cute poses 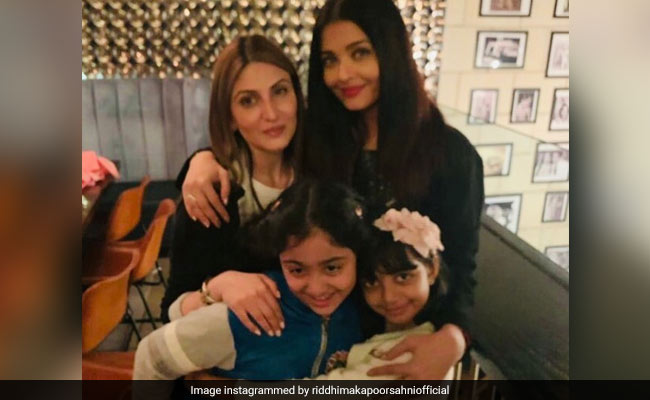 Riddhima Kapoor delighted her Instafam with the "cutest" picture ever (her words). In case you are wondering what's so special about the picture, we must tell you that it features mother-daughter duos Aishwarya Rai Bachchan and Aaradhya, and Riddhima Kapoor along with her daughter Samara Sahni. The quartet can be seen happily posing for the camera. In the photograph, Aishwarya and Riddhima can be seen dressed in black ensembles. Aaradhya, who can be seen embracing Samara, looks cute as a button in a white outfit. Riddhima captioned the picture in the best possible way and wrote: "cutest girls ever." She also added the caption "#mamasanddaughters."

On Wednesday, Riddhima Kapoor shared another picture on her Instagram profile, which also featured Aishwarya Rai Bachchan, Abhishek Bachchan, Aaradhya, Samara along with many other friends and family members. This is the post we are referring to:

Last week, Riddhima shared a picture of Aishwarya Rai Bachchan, Abhishek and Aaradhya along with Rishi Kapoor and his wife Neetu Kapoor. The picture also comprised Rishi Kapoor's sister Ritu Nanda and his niece Nitasha. That's not it, the photograph also featured Ranbir Kapoor along with Alia Bhatt. The star-studded picture went viral on social media. Take a look at the post here:

During his stay in New York, Rishi Kapoor, who is there for the treatment of cancer, was visited by several stars including Shah Rukh Khan, Aamir Khan, Deepika Padukone, Priyanka Chopra, the Ambanis, Vicky Kaushal and Anupam Kher to name a few.