Samara steals the show with her goofy pose in the photograph 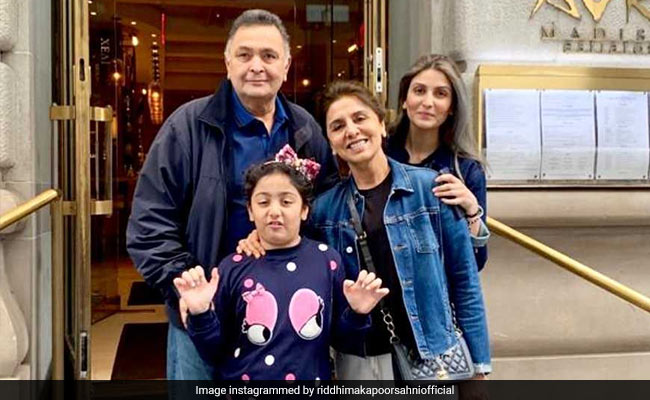 Rishi Kapoor with his family in New York.(Image courtesy: riddhimakapoorsahniofficial)

Rishi Kapoor, who is currently undergoing treatment for cancer in the US, is having a great time and why shouldn't he? The actor has special visitors afterall, who happen to be none other than his daughter Riddhima Kapoor and his granddaughter Samara Sahni. Riddhima shared a picture from their "fam-jam" session on Instagram on Thursday. The picture also features Rishi Kapoor's wife Neetu Kapoor, who has accompanied the actor to the Big Apple. In the photograph shared by Riddhima Kapoor, the quartet can be seen happily posing together for the camera as they stand dressed in colour-coordinated outfits. However, little Samara steals the show with her goofy pose.

Riddhima Kapoor's post will instantly bring a smile to your face. She accompanied the picture with hashtags like #famjam, #nycdiaries, #happydaysonly and #nolookingbacknow. Take a look at the picture here:

Besides members of the Kapoor clan, Rishi and Neetu Kapoor were visited by several Bollywood stars, including Shah Rukh Khan, Deepika Padukone, Vicky Kaushal among others during their stay in New York, snippets from which were shared by Neetu Kapoor on her Instagram profile. Check out pictures here:

Rishi Kapoor, who moved to New York in September last year, has now been declared cancer free. The actor is expected to return to India soon and will reportedly celebrate his 67th birthday with his family in India.