Rishi Kapoor has been in the US for over eight months now, undergoing treatment for cancer. 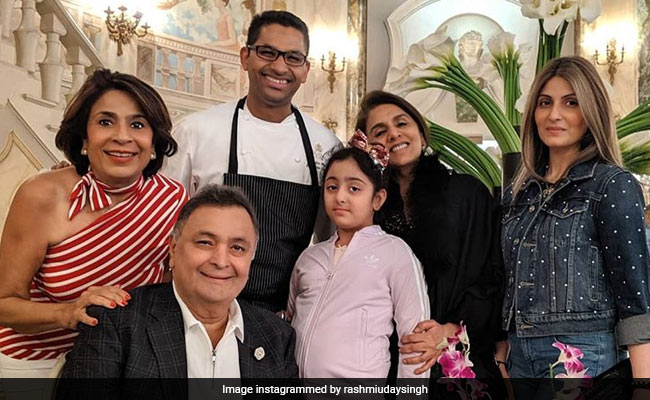 Rishi Kapoor with his family in New York (courtesy rashmiudaysingh )

Rishi Kapoor is enjoying his New York days to the fullest! The veteran actor, who is in the Big Apple for treatment, had two new visitors recently - daughter Riddhima Kapoor Sahni and granddaughter Samara. And looks like to celebrate the mini fam-jam, Rishi and Neetu Kapoor stepped out for some French delicacies and fine dining at New York's Perrine. Joining them for the dinner was author and food critic Rashmi Uday Singh, who shared a few glimpses of the dinner get-together on her Instagram. Sharing a photo of herself along with Rishi Kapoor, Neetu Kapoor, Riddhima, Samara and chef Ashfer Biju, she captioned her album: "Rocking with the charmer and original rock-star Rishi Kapoor. Forever gorgeous three generations Neetu, Riddhima and Samara over a memorable dinner by brilliant chef Ashfer Biju at Perrine."

Take a look at the Kapoors' dinner photos here:

On his Twitter, Mr Kapoor thanked Rashmi for the dinner:

At the restaurant "Perrine"NYC. My compliments to Rashmi and The Taj group- Hotel The Pierre New York https://t.co/naEHoYTKfZ

Rishi Kapoor has been in the US for over eight months now, undergoing treatment for cancer. The 66-year-old actor is currently in remission and is expected to return home sometime soon. Last month, Rishi Kapoor wrote an emotional tweet that made us miss him back home all the more: "Today I complete eight months here in New York. When will l ever get home?"

Thank you for seeing us Mukesh and Neeta. We also love you. pic.twitter.com/bYzi5Bt9N5

In September last year, Rishi Kapoor had taken a break from work and social media, saying he's headed to the US for treatment. Mr Kapoor, who has a reputation of being fiercely outspoken on Twitter, has begun making his presence felt on social media again.