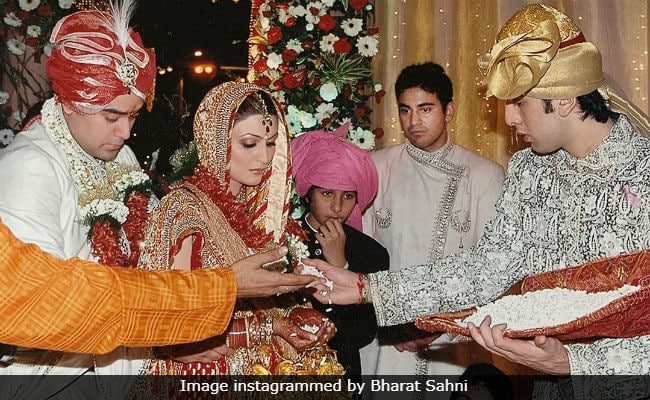 This picture was shared by Bharat Sahni. (Image courtesy: Instagram)

Riddhima Kapoor and Bharat Sahini are celebrating their 14th wedding anniversary today and to wish his wife, Bharat posted pictures from their wedding album but his brother-in-law Ranbir Kapoor stole the show. Ranbir, dressed in an embroidered sherwarni, can be seen taking part in rituals reserved for the bride's brother. Ranbir Kapoor's fans only had eyes for the Ae Dil Hai Mushkil actor. At the time of Riddhima's wedding, Ranbir Kapoor had not debuted in Bollywood. Saawariya released in 2007. Riddhima is the elder of Rishi Kapoor and Neetu Kapoor's two children. Riddhima and Bharat Sahni, a businessman, are parents to seven-year-old daughter Samara Sahni.

Take a look at pictures from the wedding album of Riddhima Kapoor and Bharat Sahini:

Can't believe it's been 13 years from this day. Here's to love, laughter and happily ever after. Happy anniversary my @riddhimakapoorsahniofficial

Neetu Kapoor also wished Riddhima and Bharat on their anniversary. Neetu Kapoor is currently in the US with Rishi Kapoor, who is receiving medical treatment for an unknown ailment.

If perfection had a name it would be these two dumplings @brat.man @riddhimakapoorsahniofficial love love them happy Anniv

Riddhima Kapoor, who is the granddaughter of Raj Kapoor, did not opt for a career in films like many of her family members. Her cousins Kareena and Karisma Kapoor, daughters of Randhir Kapoor and Babita, are also actors. Riddhima Kapoor is a jewellery designer and she recently launched a clothing line for children - Sam And Friends - named after her daughter Samara.

Ranbir Kapoor was last seen in Sanju, which was the second highest-earning film of 2018. As of now, he's filming Brahmastra with Alia Bhatt. The film is directed by Ayan Mukerji and produced by Karan Johar. Ranbir Kapoor has also signed up for Yash Raj Films' Shamshera.