Rishi Kapoor, in the last leg of his cancer treatment, is surrounded by his family members 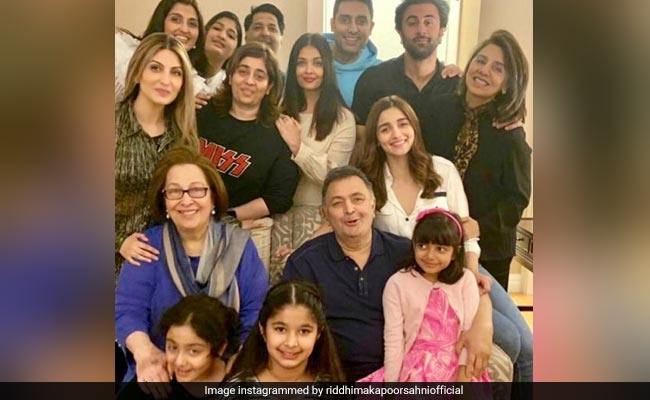 Rishi Kapoor poses with his family members in the US. (Image courtesy: riddhimakapoorsahniofficial)

Rishi Kapoor, whose treatment for cancer started in the US in September last year, featured in his daughter Riddhima Kapoor Sahni's super-duper fam-jam picture, surrounded by his loved ones with a big smile on his face. Rishi Kapoor along with his wife Neetu Kapoor, son Ranbir Kapoor and his rumoured girlfriend Alia Bhatt posed with Aishwarya Rai Bachchan, Abhishek and Aaradhya in the picture. Rishi Kapoor's sister Ritu Nanda and his niece Nitasha along with some close friends also joined in. For the uninitiated, the Bachchan-Kapoor family link is - Abhishek's sister Shweta is married to Ritu Nanda's son Nikhil. In another picture from the same day, Neetu and Rishi Kapoor can be seen posing with Ranbir, Alia and Riddhima. Only Riddhima's husband Bharat Sahni was MIA - as she noted in caption.

Neetu Kapoor shared the same set of pictures on her own Instagram page and wrote: "Your family is your whole world. So, so many LOVES in these beautiful moments."

Take a look at Riddhima and Neetu Kapoor's Instagram posts:

When in the US, Rishi Kapoor had a star-studded guest list, which included Shah Rukh Khan, Aamir Khan, Deepika Padukone, Priyanka Chopra, the Ambanis, Vicky Kaushal and Anupam Kher to name a few.

In May, Rishi Kapoor told Deccan Chronicle that he was cancer free and in remission and after a bone marrow transplant he will journey home. Earlier this month, the actor told Mumbai Mirror that he wants to celebrate his 67th birthday on September 4 in India. "Yes, I am trying to return by August-end, depending on what the doctors at the hospital say. I have recovered well and I am feeling good. Must be 100% fit by the time I am back," the 102 Not Out actor said.