Thank you, A R Rahman, for sharing this Zoom screenshot 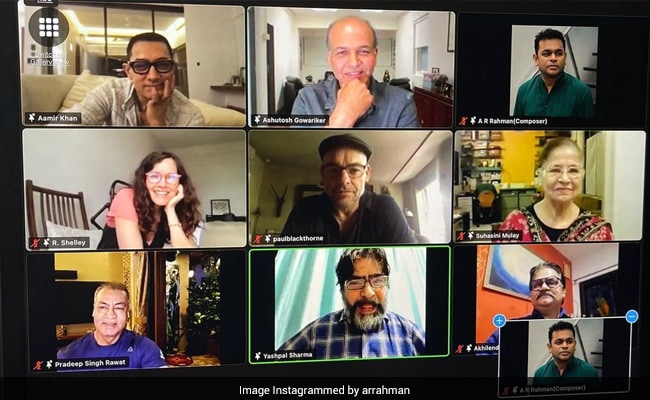 Thank you, A R Rahman, for sharing this Zoom screenshot, which will be remembered for a long, long time. June 15 this year marked 20 years of Lagaan - to celebrate exactly that, the film's team had a reunion of sorts. Given the pandemic situation, the reunion was a virtual one but was attended by not only the film's lead star Aamir Khan but also British actor Paul Blackthorne - remember Captain Russell? In Bollywood, Paul Blackthorne is best remembered as the villainous Captain Russell, who addressed the villagers as "Tum saala ghulam log" and asked for "dugna lagaan." The Zoom call was also joined by British actress Rachel Shelley, who was cast as Captain Russell's sister Elizabeth, who falls in love with Aamir Khan's character Bhuvan - an unrequited love story.

A R Rahman, who composed music for Lagaan, shared a glimpse of the reunion on Instagram with the words: "An emotional and proud team!"

Meanwhile on Tuesday, actress Gracy Singh, who was cast as Aamir Khan's love interest Gauri in Lagaan, shared a bunch of memories. "This is where my journey in cinema began. I stood in front of a movie camera and cherished every bit of it. 20 years since this epic released," she wrote.

This is where my journey in cinema began. I stood in front of a movie camera & cherished every bit of it. 20yrs since this epic released. Immense gratitude to @AshGowariker#AamirKhan ,entire TeamLagaan
THANKYOU our audience & media for all the love you showered#20YearsOfLagaanpic.twitter.com/6JvbqaC8rm

20 years after Lagaan, in an interview with PTI on Tuesday, Aamir Khan revealed he was discouraged by Karan Johar and Aditya Chopra about Lagaan: "I remember I met Karan Johar and Adi (Aditya Chopra) at a party just a few days before the outdoor and they told me I was making a big mistake. They advised me to not shoot in a single schedule. They said it will become a mess but I stuck to my guts. And today both Adi and Karan are doing sync sound and single schedule."