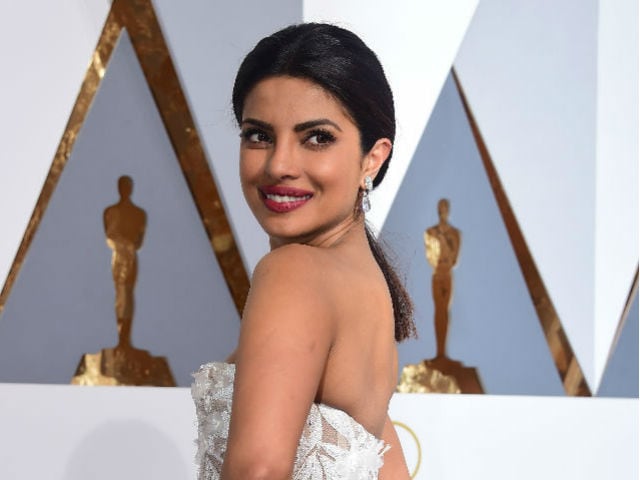 New Delhi: If you need a good reason to wake up at the crack of dawn on Monday to watch the Oscars, here it is. Actress Priyanka Chopra, who is awaiting the release of her Hollywood debut Baywatch, has confirmed that she will be attending the 89th annual Academy Awards with rock and roll legend Sir Mick Jagger, iconic frontman of The Rolling Stones. The 34-year-old actress shared a picture with Sir Mick on Instagram, captioned: "Change of plans ! Oscars here we come.. @mickjagger LA LA land." Priyanka Chopra had attended the Oscars last year as well. She walked the red carpet dressed in a lacy white Zuhair Murad dress, which was the seventh most searched Oscar outfit on Google. The Bajirao Mastani actress had presented the award for Best Film Editing at last year's Oscars along with actor Liev Schreiber.

Priyanka Chopra will be making her Hollywood debut with Baywatch, directed by Seth Gordon, later this year. The Mary Kom actress will be seen sharing screen space with Dwayne 'The Rock' Johnson and Zac Efron. The movie is set to release in theatres on May 26. Dwayne Johnson will also be attending the Oscars and will present Lin-Manuel Miranda's performance of How Far I'll Go, the Oscar-nominated song from The Rock's film Moana.

Meanwhile, Priyanka Chopra is in New York shooting for the second season of her American TV show Quantico. Her portrayal of the character Alex Parrish earned her a People's Choice Award two consecutive times.

Promoted
Listen to the latest songs, only on JioSaavn.com
Priyanka Chopra is now a familiar name internationally and has appeared on chat shows such as - The Ellen Show, The Tonight Show With Jimmy Fallon, Jimmy Kimmel Live and The Late Show with Stephen Colbert. She has also attended big ticket international events such as the Emmys last year and the Golden Globes this year.

Priyanka, who was last seen at home in Prakash Jha's Jai Gangaajal, also made a solo appearance on the current season of Karan Johar's show Koffee With Karan.

Oscars 2017: Where To Watch 89th Academy Awards LIVE In India