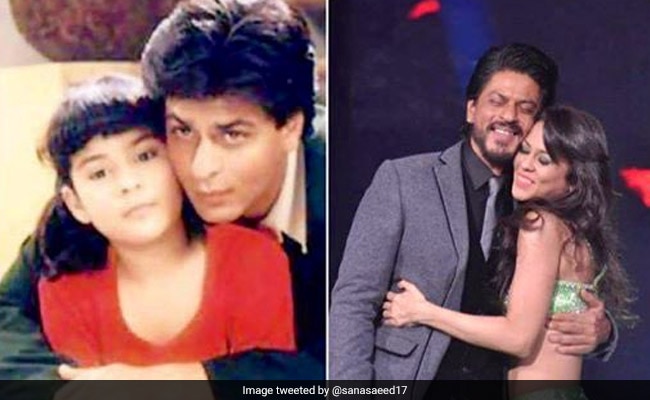 Shah Rukh Khan's iconic film Kuch Kuch Hota Hai completed 21 years on Wednesday and the film's actress Sana Saeed celebrated the occasion by sharing an adorable throwback picture of herself and her onscreen father Shah Rukh Khan aka Rahul. Kuch Kuch Hota Hai, which released nearly two decades ago on October 16, featured Shah Rukh Khan, Rani Mukerji and Kajol in the lead roles. Sana Saeed starred in the film as the child artist. Posting a collage on her social media profile, Sana wrote: "Happy 21st to this timeless and priceless film. #KuchKuchHotaHai." The collage, on one side, featured her throwback picture with Shah Rukh Khan from the film and on the other side, featured one of her recent photos with the 53-year-old actor.

Now, take a look at the aforementioned post here:

Happy #21st to this timeless and priceless film #KUCHKUCHHOTAHAI@iamsrkpic.twitter.com/onrQeWwaUE

As Kuch Kuch Hota Hai clocked 21 years, Karan Johar, who made his directorial debut with the film, shared a nostalgic post and accompanied it with a heartfelt caption. "Firsts are always special. The cast, crew, music and the heart and soul of this film was all in the right place. Thank you for making this journey a timeless one even after 21 years," he wrote.

Firsts are always special! The cast, crew, music & the heart & soul of this film was all in the right place Thank you for making this journey a timeless one even after 21yrs! #21YearsOfClassicKKHH @iamsrk @kajol #RaniMukerji @beingsalmankhan @apoorva1972 @DharmaMovies

Kuch Kuch Hota Hai, which emerged as one of the biggest hits of the year 1998, won several accolades for its amazing story including the National Film Award for the Best Popular Film Providing Wholesome Entertainment in the year 1998. The film also starred Salman Khan, Farida Jalal, Anupam Kher, Archana Puran Singh, Reema Lagoo and Johnny Lever.