16 Years After Kabhi Khushi Kabhie Gham, Kajol Reveals The Backstory Of This Poster 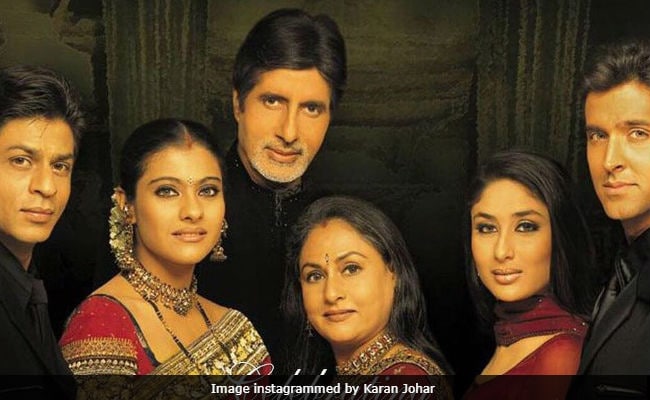 New Delhi: Remember the poster of Kabhi Khushi Kabhie Gham with the principal cast (Amitabh Bachchan, Jaya Bachchan, Shah Rukh Khan, Hrithik Roshan, Kajol and Kareena Kapoor) dressed in red and black outfits? 16 years after the film released, Kajol and director Karan Johar revealed the story behind the photoshoot. KJo instagrammed the film's poster on Thursday, which was reposted by Kajol with a question: "Wasn't this taken when I got my finger caught in the door and I was three Combiflams down?" And yes, it was. Karan Johar replied: "Yes, this was. I remember you were in excruciating pain." Well, even while filming it was Kabhi Khushi Kabhie Gham.

Kajol and Karan Johar recently rekindled their broken friendship. In 2016, when KJo's Ae Dil Hai Mushkil clashed with Kajol's husband Ajay Devgn's Shivaay, their relationship soured. In his biography, Karan Johar also said that his relationship with Kajol is beyond repair but that was not the case. Kajol was the first person Karan texted after his twins - Yash and Roohi - were born, which was the start of the second innings of their friendship.

Kabhi Khushi Kabhie Gham, which released in 2001, was Karan Johar's second film as director after 1998's Kuch Kuch Hota Hai - Kajol featured in his debut film too. Karan took a trip down the memory lane and shared some behind-the-scenes photos from the film's sets. These included Big B, Shah Rukh, Hrithik and also choreographer Farah Khan.

Me overacting trying to teach KAREENA what to do!!! #16yearsofk3g