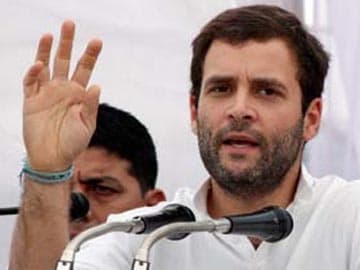 New Delhi: In January, as Rahul Gandhi's mother and Congress chief Sonia Gandhi handed her son his new responsibility of leading the party's campaign in this year's general elections, she stopped short of formally designating the name of "PM candidate" to that role. For a party hard-wired to expect generations of Nehru-Gandhis to lead it, it was a disappointment.

But, say Congressmen of all hue fervently, if the party wins again, Rahul Gandhi will be prime minister. Polls and surveys suggest that might remain a fond hope this year, unless the Congress pulls a rabbit out of the hat. They give rival party the BJP an edge.

Ever since he made his political debut 10 years ago, Congressmen have held their breath to see the Gandhi heir step into what was for long mysteriously called a "bigger role." Through 10 years of the Congress-led UPA running the show at the centre, Mr Gandhi did not join the government, choosing to work for the party as the MP from family bastion Amethi in Uttar Pradesh.

Last year, Mr Gandhi, was formally elevated to the role of Congress vice-president.

Rahul Gandhi was born in Delhi on June 19, 1970 to Rajiv and Sonia Gandhi, their first child. He grew up in the non-political part of the family. Rajiv, his father, a commercial pilot, was not Indira Gandhi's intended political heir; his uncle, Sanjay Gandhi was. But Sanjay Gandhi died in a plane crash in 1980, forcing a reluctant Rajiv Gandhi to enter politics. Just four years later, in 1984, Indira Gandhi's assassination would propel him to the forefront of the Congress and see him become India's youngest Prime Minister at age 40.

20 years later, Rahul Gandhi, then 34, was another reluctant entrant into the political fray. Mr Gandhi first fought the Lok Sabha elections in 2004, contesting from Amethi, a seat his father had once held. As he campaigned, Amethi embraced him warmly, fondly making comparisons between father and son. The people of Amethi had no doubt then that they were sending India's future Prime Minister to Parliament.

In an electoral upset, the Congress wrested power that year from the BJP-led NDA and has not let go since.

While Mr Gandhi resisted any attempt to draft him into government or hand him a fancy designation within the party, he accepted charge of part organisations like the Indian Youth Congress and National Students Union of India (NSUI).

His supporters insist that he must be credited with initiating reforms in the party - such as elections to the Youth Congress, corporate-style interviews for selection to the party, and pushing for democratisation of the Congress party.

Lately, Mr Gandhi has pushed for what he calls the framework of his fight against corruption - several laws that he says will check graft. Among them, the Lokpal Bill, which was passed by Parliament late last year. The Congress gives all credit for the bill being passed to Mr Gandhi.

But there have been persistent question marks over Mr Gandhi's ability to translate his personal charisma and ideas for the party into votes when it matters. The most recent being the Congress' humiliating 4-0 rout in the assembly elections in 2013, when, in a rare appearance with his mother, the 43-year-old said, "The people have sent us a clear message. We have heard it... not just in our minds but in our hearts."

Earlier, the Congress has faced crippling defeats in states like UP and Bihar with Mr Gandhi leading the party.

His appetite for power has often been questioned by critics, who also say his ability and instincts remain unproven. He has no ministerial experience and has typically been evasive about his future role.

But in a rare moment of public leadership, he publicly contradicted Prime Minister Manmohan Singh in September last by denouncing the government's intention to move a decree to shield lawmakers convicted of corruption. The move was criticised for undermining the authority of the Prime Minister.

But Congress veterans and young guns are hopeful that Mr Gandhi is the man to galvanise the party and lead it to a third straight victory in the Lok Sabha elections. They credit him with promoting young faces in the Congress and his close aides say he has detailed political knowledge and is a practised backroom operator.

Promoted
Listen to the latest songs, only on JioSaavn.com
Mr Gandhi, a bachelor, was educated in India and in the US and has worked in London. In his political avatar, he favours a white kurta pyjama with sports shoes and often sports a stubble or sometimes even a full beard. Till some years ago, he was spotted sometimes racing a motorcycle in Delhi with his brother- in-law Robert Vadra, much to the chagrin of those charged with his security.

They have often also been stretched as Mr Gandhi, who has the highest-level security, has slipped into crowds of people and mingled with them. He rode pillion on a motorcycle one early morning to reach the site of farmers' protests in Bhatta-Parsaul village in Uttar Pradesh. Or another time, got into a local train in Mumbai to reach the venue of a political meet.