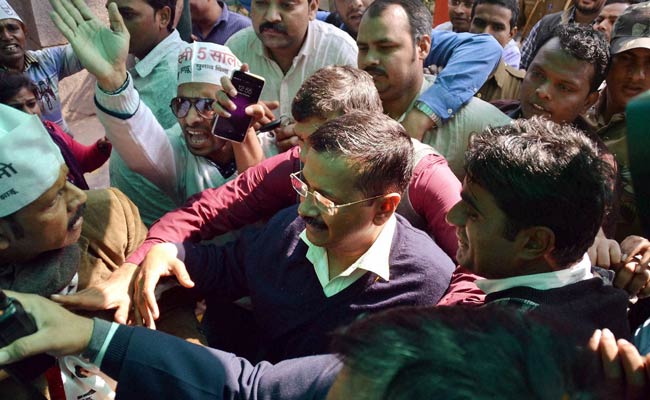 Arvind Kejriwal being greeted by his supporters at Kaushambi.

Haryana's Bhiwani region has seen three of its sons become chief ministers. Today, it witnessed a fourth - Aam Aadmi Party chief Arvind Kejriwal - get ready to take over the top job in Delhi for a second time, and with a resounding mandate.

As AAP swept the elections in neighbouring Delhi, jubilation started in Siwani village. People distributed sweets and burst crackers, celebrating the victory of the "common man".

Mr Kejriwal's ancestors hailed from Kheda village of Bhiwani. But the family is now based in Siwani village, around 60 km from Bhiwani town.

"There have been celebrations in the family. It is a moment of great happiness, not for just the family but for every common man, who has been striving to change the system for good," news agency Press Trust of India quoted Mr Kejriwal's cousin Suman as saying.

The area has witnessed three chief ministers earlier - Banarsi Das, who was the chief minister of Uttar Pradesh in 1979-80, and Hukam Singh  and Bansi Lal, who occupied the top post in Haryana more recently.

Still, for people across Hisar, Siwani and Kheda it is a great moment as Mr Kejriwal is set to become the chief minister of Delhi for the second time, Suman's husband Ankur told PTI.

"Suman and I spoke to Kejriwal on phone and congratulated him and his mother Geeta Devi," he said. "Kejriwal told us that it was a victory of the people."

Mr Kejriwal's concern for the people is something of family trait, claimed Manoj Kumar, a villager. His ancestors had got a well dug so the women will not have to walk long distances to fetch water, he said.

Promoted
Listen to the latest songs, only on JioSaavn.com
The 46-year-old Magsaysay award winner who quit the Indian Revenue Services to fight graft, came into prominence following the activist Anna Hazare's agitation for Jan Lokpal Bill in 2011.

Villagers Hounded Out Of Nandigram By "BJP Goons": Mamata Banerjee