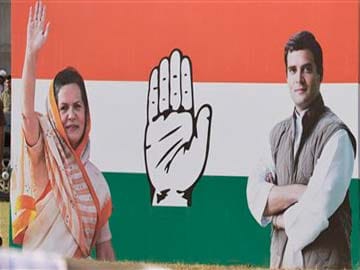 New Delhi: The incumbent Congress has accepted that it has been trounced by the opposition BJP in the national election, but predictably, the party offered cover to frontman Rahul Gandhi, claiming the blame is "collective."

Early results showed the party set for its worst-ever electoral result with an estimated tally of just 69 seats (at 10.45 am). (BJP Set to Cross Half-Way Mark on its Own)

Led by Narendra Modi, its prime ministerial candidate, the BJP is set for a landslide victory. With its allies, the party is expected to get a decisive majority of more than 300 of the 543 parliamentary seats

"Rahul alone is not to blame, it is a collective failure," said Congress leader Satyavrat Chaturvedi to NDTV, underscoring the party's unwavering allegiance to its First Family, despite a crushing defeat. (Congress Distances Rahul Gandhi from Potential Poll Debacle)

Another Congress leader, Rajiv Shukla, said, "Mr Modi had sold a dream to India...to which it has subscribed."

He claimed Mr Modi has promised voters "Jupiter and Saturn."

In fact, Mr Modi, in a presidential-style campaign built around him,  vowed to expunge corruption, reboot the economy and deliver efficient governance, accomplishments that he says he has delivered in his home state of Gujarat in his four terms as chief minister.

He was always assured the votes of his core Hindu nationalist supporters, but his election pitch has drawn the urban middle classes as well as the poor, whose loyalty has traditionally been to Congress and its welfare schemes.

Promoted
Listen to the latest songs, only on JioSaavn.com
Rahul, the scion of the Gandhi bloodline which has run India for most of its history since independence in 1947, led a lacklustre campaign for the Congress.

After years of criticism of his aloof style, the 43-year-old gave further ammunition to his critics by skipping a farewell dinner this week for Prime Minister Manmohan Singh. ('Where is Rahul?' Heard At Sonia's Dinner for PM)