Kerala Plus Two Result 2018 To Be Released Soon @ Keralaresults.nic.in; Everything You Need To Know

The Kerala DHSE will publish the HSE, VHSE Class 12 (Plus Two) 2018 results on May 10 @ Keralaresults.nic.in and Dhsekerala.gov.in.

After the official declaration, the Kerala Plus Two results will be released on websites like keralaresults.nic.in, results.itschool.gov.in and dhsekerala.gov.in, said the statement. Kerala DHSE is releasing Plus Two results five days earlier than it was released last year.

Kerala +2 examinations results will be declared on May 10 at 11:00 am from the PRD Chamber situated at the south block of Kerala Secretariat by the education minister Prof. C. Raveendranath. The results will be released later @ https://t.co/B9ooWcsEDj. #Plustwo #KeralaPlusTwo pic.twitter.com/cTgZS8tIPn


The Kerala Plus Two results were declared last year on May 15.

The class 12 or plus two exams in Kerala were conducted across in Kerala, Mahe, Lakshadweep and the Gulf countries for more than 4.6 lakh students from March 7 to March 28 this year.


Kerala Plus Two Result 2018: Everything You Need To Know 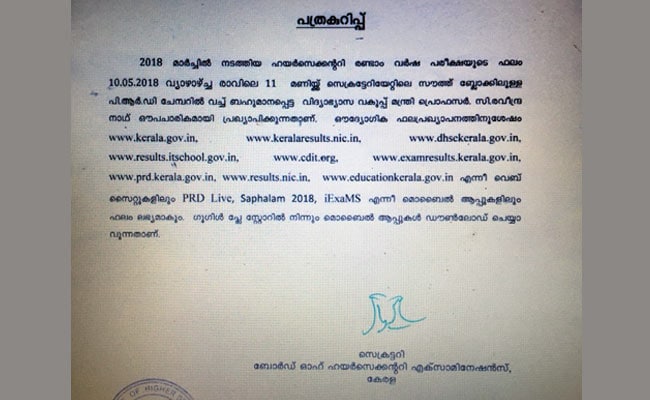 Here is the details of everything you need to know about Kerala Plus Two results 2018:

Kerala Plus Two Results 2018: When To Check

Kerala DHSE Plus Two Results 2018: How To Check

The students who are searching for the class 12/Plus two HSC, VHSE results may follow these steps to check the results:

Step One: Go to any of the official website of the Kerala education results
Step Two: Click on the results link given there
Step Three: Enter your official examination registration details
Step Four: See your results after submitting it

The Kerala class 12 results will be available on the following official websites:

The students can also check their DHSE results on private third party websites like www.examresults.net.

Along with the above mentioned websites, the Kerala SSLC results will also be released on iExaMS, the PRD Live app of Kerala Public Relations Department and Saphalam app of Kerala Education Department. The apps are available on Google Play Store.

Saphalam 2017 app is created by IT@School.