JEE Main result will be released on the official website, jeemain.nta.nic.in.

JEE Main result will be released on the official website, jeemain.nta.nic.in.
New Delhi:

Of the nine who got 100 percentile score in the examination also include Delhi boy Nishant Agarwal. The others are - one each from Gujarat and Haryana, two each from Andhra Pradesh, Rajasthan and Telangana, the news agency quoted the education ministry.

"We are trying our level best to release the results today. The preparation is full on," an NTA official said when asked about the JEE Main result declaration.

The test was held in two-shifts every day and in computer-based mode. 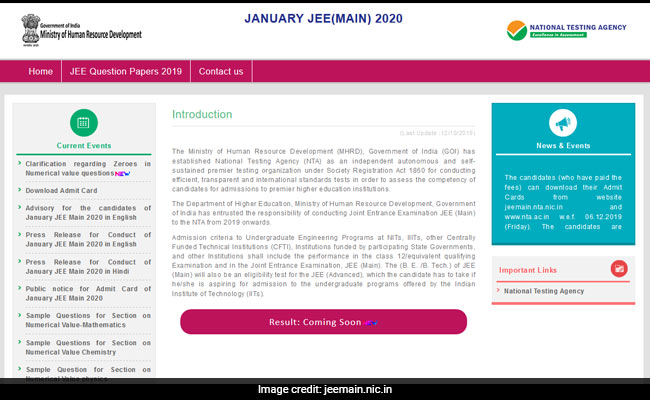 JEE Main result will be released on the official website, jeemain.nta.nic.in.

As per data released by the NTA, the organizing authority for the exam, 11,18,673 candidates had registered for the JEE Main exam.

For B.Planning, 33,198 male candidates, 25,804 candidates, and 1 transgender candidate had registered for the exam.

All the exam centres were under Live CCTV Surveillance. The NTA had also opened a control room and 30 State Coordinators, 240 City Coordinators and 600 Observers were positioned.

Authorities In Kashmir Planning To Reopen Schools From Mid-June

COVID-19 Lockdown: Schools And Colleges In Delhi To Remain Closed Until Further Notice

Looking At Temples Or Community Centres As Alternate Sites For Schools: Education Ministry