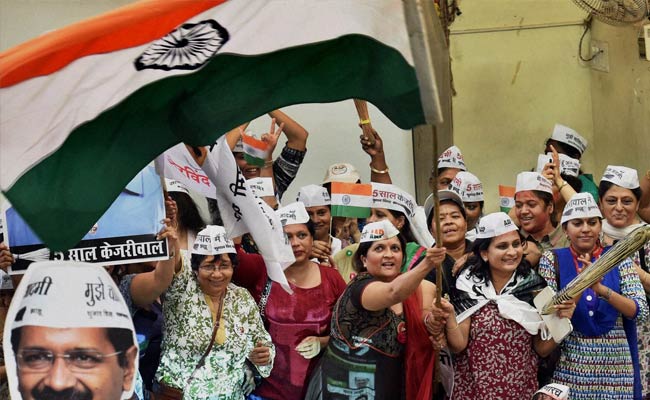 The Aam Aadmi Party, or Common Man Party, won 67 of the 70 seats in the Delhi Assembly, far more than surveys or even the most enthusiastic of the party's supporters had predicted. Aam Aadmi is led by Arvind Kejriwal, a former tax examiner who rose to fame as a campaigner against graft and refashioned himself into a defender of this city's lowest social strata.

Kejriwal briefly served as Delhi's chief minister a year ago, but he resigned after just 49 days. The move was one of a series of apparent missteps he made since coming to prominence, including a cantankerous split with his first political patron and, last year, a decision to create a national party that would compete across India for parliamentary seats, which largely failed.

But Kejriwal's oft-repeated apologies and 70-point manifesto promising to improve the lives of Delhi's vast underclass - through a crackdown on corruption, as well as by providing cheaper electricity, free water and more accessible schools - resonated strongly across the sprawling capital region in the voting held Saturday.

For Modi, the Delhi results represent the first resounding defeat since his Bharatiya Janata Party won an outright majority in the lower house of India's parliament in May, the largest such majority in 30 years. In that election, the party won all seven parliamentary seats in Delhi; as late as December, polls had indicated that the BJP would win the Delhi elections handily.

But despite a string of successful foreign trips, Modi's government has yet to demonstrably revive India's economy, which is producing a fraction of the jobs needed for the roughly 12 million people who come of age here annually. This latest election is the first sign that voters may be losing patience.

The Delhi results also deepened the crisis engulfing the once-dominant Indian National Congress party, which ruled Delhi for 15 years until 2013 but failed to win a single seat Tuesday despite vigorous campaigning by Rahul Gandhi, the scion of the Nehru-Gandhi dynasty.

Showered by rose petals and raucous chants from hundreds of well-wishers who thronged the alley outside his party's headquarters, Kejriwal appeared on a third-floor balcony flanked by his wife and closest aides Tuesday.

"This is the triumph of truth. Neither do we have money, nor do we have any resources," Kejriwal said in Hindi, Delhi's dominant language.

"But it's scary. This huge mandate begets responsibility in its wake. I would like to request all party workers to remain humble and not indulge in the slightest bit of pride."

Kejriwal said he would take the oath as chief minister Saturday at Ramlila Maidan, a field where he helped stage vast anti-corruption protests in 2011.

Half of India's population is younger than 25, and Aam Aadmi became the party of the young, with thousands of students from around India volunteering as canvassers.

Nishtha Sood, 24, came from the southeastern state of Jharkhand because she saw Kejriwal as the answer to the routine corruption that she said had cost her father his land.

"What other choice do we have if we want a corruption-free government?" Sood asked.

Kejriwal's vow to crack down on small-scale corruption has particular resonance among slum dwellers. The vast majority of Delhi's cycle rickshaw drivers and street hawkers, for example, do not have permits and are routinely pressured for small bribes by constables who often pay bribes to land their jobs.

Soni, a one-named woman who sells flatbread for 10 rupees (or 16 cents) apiece from a tiny brick oven set up on a back street, said that before Aam Aadmi's rise, her family used to pay 1,000 rupees a month - roughly a quarter of their earnings - in bribes to the police and licensing officials lest "the vehicle come and take away my whole establishment."

"I voted for the broom," she said Tuesday, referring to Aam Aadmi's ubiquitous symbol. "He is the man who helps the poor."

Beside her was Om Beer, 39, who sells buttermilk from a tin pail hooked to his bicycle. He said the police did not usually ask him for money but regularly demanded cups of free buttermilk.

"I've seen how they took his bicycle away," a bystander said, as Beer looked at his feet, ashamed.

Virender Kumar, 47, who drives a motorized rickshaw, said Tuesday that Kejriwal's tenure leading Delhi a year ago had offered a brief respite from bribe-taking constables because a hotline had been created to report corruption.

"Again it started after he stepped down," Kumar said, referring to routine extortion.

Commentators disagreed Tuesday about how badly Modi and his party would be wounded by the Delhi results. In speeches, Modi had vilified Kejriwal, and Modi's picture was the dominant image on full-page newspaper ads in the days leading up to the vote.

Modi won last year in part by trumpeting his upbringing as the child of a tea-seller, a modest background that contrasted sharply with that of Gandhi.

But recently, Modi has been seen wearing a suit with pinstripes made from the repeated printing of his own name, reported to have cost $17,000. Kejriwal, by contrast, is known as "the muffler man" for his modest attire and his ungainly habit of wrapping his head in a scarf to stay warm.

Mamata Banerjee, the chief minister of the state of West Bengal and a fierce critic of Modi, tweeted Tuesday that the results were a "turning point."

"This is a victory for the people and a big defeat for the arrogant and those who are doing political vendetta & spreading hate among people," Banerjee tweeted.

Meenakshi Lekhi, a spokeswoman for Modi's party, said the Delhi rout "is a small loss and a big lesson."

"We will introspect in the coming days," Lekhi said.

The courtyard of the Congress party headquarters was nearly deserted Tuesday but for a few morose reporters. Ajay Maken, the head of the Delhi campaign, tendered his resignation Tuesday morning and left. P. C. Chacko, general secretary in charge of the Delhi elections, sat at his desk sipping tea.

"In fact, we have been expecting at least a few seats in Delhi," Chacko said. "We were really not prepared. We didn't have our organization structure intact."

Outside the gates, a handful of Congress workers held up pictures of Priyanka Gandhi, the sister of the party's leader, and shouted "Bring Priyanka, save Congress."

"Rahul Gandhi, I'm sorry to say this, but he is a flop," said Haseeb Ahmed, 30, a Congress party member from Allahabad who had traveled to Delhi on Monday with the small group.

Promoted
Listen to the latest songs, only on JioSaavn.com
But Rashmi Kant, a Congress leader, said Gandhi would soon revive the party's fortunes.

"The Congress is going to come again," Kant said.