In Delhi Government Proposal, 25% Of All Vehicles To Go Electric By 2023

Under the policy, the Delhi government has proposed to give a subsidy of up to Rs 22,000 on the purchase of e-two-wheelers to ensure their cost is less than or equal to petrol two-wheelers. 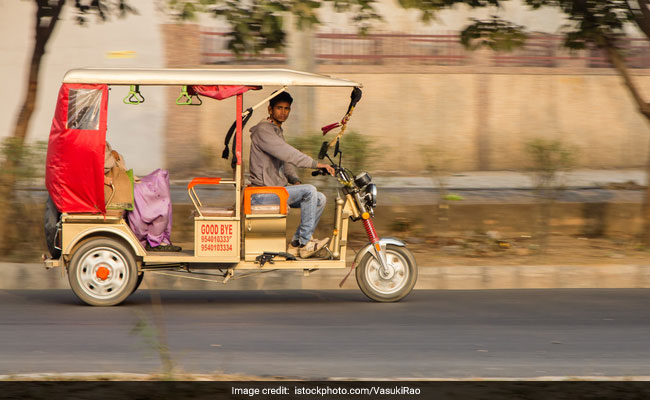 Passengers using e-rickshaws, e-cabs will get a cashback per trip: Draft policy

In a major move to fight air pollution, the Delhi government on Tuesday released its draft "Electric Vehicle Policy 2018", which aims to ensure adoption of 25 per cent e-vehicles among new registrations by 2023.

Speaking on the policy, Delhi Transport Minister Kailash Gahlot said: "About 30 per cent of particulate pollution in winter is caused by vehicles. A rapid adoption of zero-emission electric vehicles is therefore of great importance to Delhi."

Concerned about the increasing level of air pollution, the Delhi government through this policy has planned to create a significant corpus of funds to incentivise every vehicle segment.

"All incentives are in addition to the incentive offered by the Government of India as part of the Faster Adoption and Manufacturing of (Hybrid &) Electric Vehicles in India (FAME) and any subsequent amendments thereof," Mr Gahlot's office said in a statement.

The Electric Vehicle Policy 2018, the Transport Department said, has also committed to strengthen the infrastructure for "battery charging and swapping" so as to provide access within a 3-kilometre range from anywhere in Delhi.

Under the policy, the Delhi government has proposed to give a subsidy of up to Rs 22,000 on the purchase of e-two-wheelers to ensure their cost is less than or equal to petrol two-wheelers.

"Additional subsidy would be given for models with swappable battery and incentives of up to Rs 15,000 would be scrapped on old Bharat Stage (BS) II and III two-wheelers," mentioned the policy.

Moreover, the policy said: "All taxes and fees (road tax, registration fees and one-time parking fee at MCD) will be waived for all electric vehicles."

For individual electric auto-rickshaws and e-rickshaws owners, the Delhi government will give a down payment subsidy of up to Rs 12,500 and Rs 20,000, respectively.

"Passengers using e-auto rickshaws and e-cabs will get a cashback of up to Rs 10 per trip," the 2018 policy said.

On e-buses, a Delhi government statement said that at least 50 per cent of all new buses procured for the city fleet -- starting with the induction of 1,000 electric buses in 2019 -- would be completely electric.

In 2013, the government of India launched a National Electric Mobility Mission Plan 2020. Under the plan, FAME was launched in March 2015 for two years as Phase-I, which was subsequently extended up to March 2019.