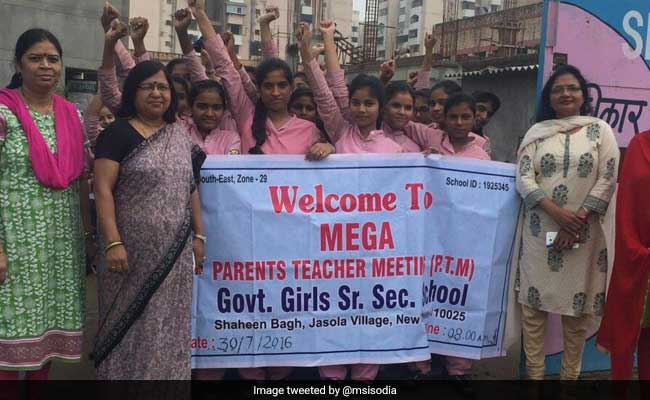 Mega Parent Teacher Meeting" organised to bring the quality of education at par with the private schools.

New Delhi: In a first, parents of around 16 lakh students studying in over 2,500 government schools in the national capital today attended a "Mega PTM" (Parents Teacher Meeting) organised to bring the quality of education at par with that imparted in private schools.

From bad handwriting to poor calculations, improper usage of grammar to lack of concentration, good speed to excellent leadership skills, parents were updated about shortcomings and positives of their wards in the meeting, perhaps the first in country for government schools.

As parents queued up in government-run schools across the national capital today waiting for their turn to listen to feedback about their ward's performance, Deputy Chief Minister Manish Sisodia visited several schools to see if all was in order and how were parents responding to this initiative.

However, the initiative was overshadowed by an alleged suicide of a girl who ended her life after her mother received negative feedback about her during a PTM at Government Senior Secondary School in Khayala area.

BJP attacked the AAP government for making the PTM a "mega political show" alleging it resulted in suicide of the 12-year-old girl.

"Today PTMs have been organised in all government schools and parents of 16 lakh students have been invited today to attend the meeting. This is a new experiment and parents are excited about it that they are being involved in the schooling of their children.

"This is another step towards bringing the quality of education being imparted in government schools at par with that of private schools," Mr Sisodia told reporters.

Parents termed the initiative to be an apt "start" for working towards improved education standards in government schools.

"We are unable to send our kids to expensive private schools and I am not educated enough to keep a check on my son's activities and performance. This will help me in being updated about his weaknesses and positives," said Ramkishan, a rickshaw puller whose son studies in the school in Nand Nagri.

In order to make parents of government school students as "stakeholders" of education, Mr Sisodia had earlier this week made an announcement for the Mega PTM which he described as first positive dialogue between parents and teachers.