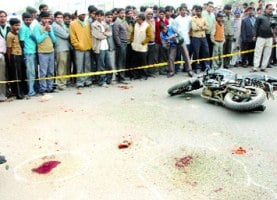 New Delhi: A miscreant was killed and a police constable injured after gunfire broke out between police and two persons involved in a chain-snatching incident on Thursday afternoon.

Police said that two persons had snatched a gold chain from a woman who was on her way home from a local market in Noida Sector-82. "The woman immediately called police and a patrol bike with constable Subhash and Home Guard constable Arun Sharma reached the spot.

Acting on the woman's information, the cops searched the area and found two persons roaming on a motorcycle under suspicious circumstances in Geja village in Sector 82. When the police team signaled them to stop, the duo fled from the spot and took to Noida-Greater Noida expressway.

Both the injured were rushed to a nearby hospital. The miscreant was declared brought dead while the Home Guard was treated for the bullet injury.

The district police have announced reward for the two cops who exhibited exemplary courage to nab the criminals. Police said they were investigating into the matter to ascertain the identity of the miscreants.

"So far we have recovered a pistol and motorbike (bearing registration number DL 7S 4Z 9079) on which the miscreants were travelling," the Deputy SP said.
Comments
Chain snatching in Delhichain snatcher killed in encounterNoida expressway