The LG said a committee had been constituted to look into ways and means of effectively address issues in the fire-prone areas like Chandni Chowk, Sadar Bazar, and Pahar Ganj. 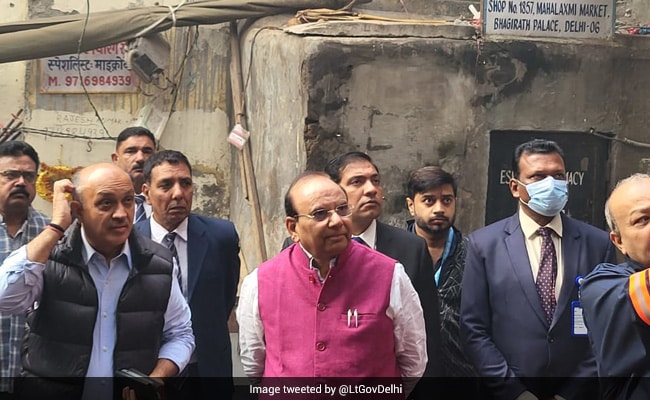 Fourteen fire tenders are working at the spot since 6 am, officials said, adding that 10-11 more would be sent to douse the blaze, which has destroyed more than 100 shops at the wholesale market.

Visited the fire site at Bhagirath Palace, Chandni Chowk, where the cooling process is yet on. With hanging wires, overloaded circuits, old buildings, water shortage & narrow lanes, such areas are dangerously prone to blazes. pic.twitter.com/hGeszJfnbj

The incident was reported at 9.19 pm on Thursday. The fire broke out in a shop in Mahalaxmi Market and soon spread to the adjacent shops of electrical appliances, according to the fire department.

The LG said a multi-disciplinary committee had been constituted to look into ways and means of effectively addressing these issues with active involvement of residents and other stakeholders in areas like Chandni Chowk, Sadar Bazar and Pahar Ganj.

A report has been sought within 30 days, he said.

Officials said the narrow lanes and congested area were challenges for them during dousing of the fire. Five buildings were affected by the massive fire and three of them have collapsed, officials had said, adding no loss of life or injuries has been reported so far.

"The cause of the fire is not yet known," Director of Delhi Fire Service Atul Garg had said.