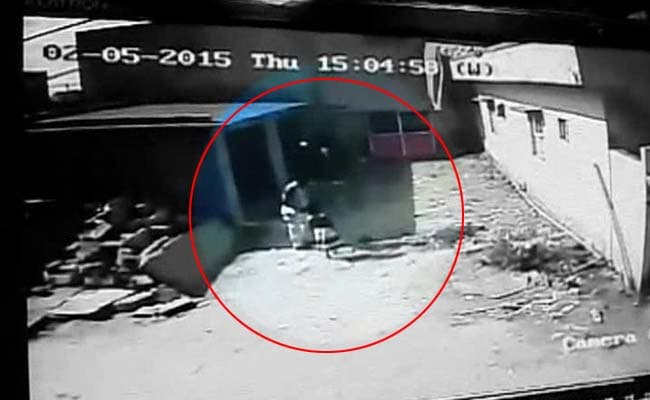 A CCTV grab shows the 8-year-old girl being led into the shed where her body would eventually be found.

The police have arrested a local worker in Bengaluru Rura for allegedly raping and killing an eight-year-old girl on February 5.

The child's body was discovered in a car shed by other children playing in the area; footage of the girl and a man entering the shed was captured on a CCTV camera at a gas connection office nearby.

The man was captured on camera played with the child before leading her into the shed. He is seen on footage emerging from the shed later without the child and walking away.

Based on the images in the footage, and with the help of people who had spoken to the man, the police had released a sketch.

The man, 20, was arrested in Hoskote taluk on Sunday afternoon.

The worker is from a village close to the crime site, Bengaluru Rural Superintendent of Police B Ramesh told NDTV. He added that the man had tried to escape from the police, and had fallen down and injured himself in the process, and had then been sent to a hospital.

Promoted
Listen to the latest songs, only on JioSaavn.com
The worker has reportedly confessed to the crime, said the police, adding that they have recovered a pair of trousers with bloodstains on them which he was reportedly wearing on the day of the crime.

The young girl's parents were migrant labourers from Huballi in north Karnataka.