After being suspended from the House, the legislators led by Mr Naidu sat on the steps outside the Assembly in protest against the YS Jagan Mohan Reddy-led government. 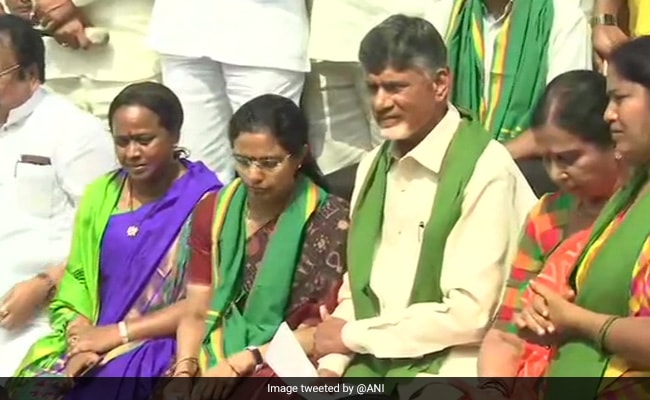 As many as 13 Telugu Desam Party (TDP) MLAs, including party's floor leader N Chandrababu Naidu, were suspended for one day from the Andhra Pradesh Assembly after ruckus during a discussion on help to farmers worst affected by Cyclone Nivar.

After being suspended from the House, the legislators led by Mr Naidu sat on the steps outside the Assembly in protest against the YS Jagan Mohan Reddy-led government.

"Telugu Desam National Party president Sri Nara Chandrababu Naidu sat at the entrance of the AP Assembly in protest against the AP Government's Van l towards thousands of farmers who have lost their everything due to #CycloneNivar," TDP said in a tweet.

TDP MLAs and MLCs organised a protest rally near the Andhra Pradesh assembly on the first day of the session, demanding immediate compensation to the farmers adversely affected by Nivar cyclone.

Opposition MLAs and MLCs protested with placards and damaged crops. They alleged that the state is ruled by cheats. TDP members raised slogans against the YSRCP government and demanded providing Rs 10,000 to every poor family affected by the cyclone.

Mr Reddy said that financial aid of Rs 500 will be granted to those who have taken shelter in relief centres after the devastating cyclone.

Eight people lost their lives due to cyclone, which included six deaths in Chittoor and two in Kadapa district in Andhra Pradesh.