The police on duty at the Taj Mahal immediately contacted the Wildlife SOS organisation which sent a team of its experts to rescue the snake. 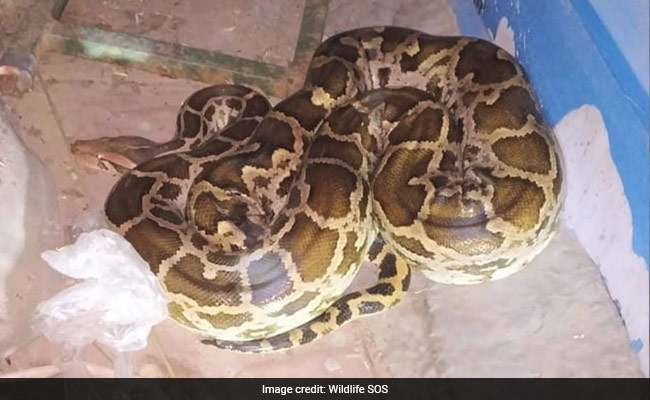 The snake was spotted by construction workers in the western parking lot of the Taj Mahal.

A 9-foot-long Indian Rock Python made its way to the parking lot of the Taj Mahal today in Agra, causing panic among locals, official said. The snake was spotted by construction workers in the western parking lot.

The police on duty immediately contacted the Wildlife SOS organisation which sent a team of its experts to rescue the snake.

After dispersing a crowd which had formed to catch a glimpse of the snake, the Wildlife SOS rescue team guided the reptile into a transport carrier and then released it into a suitable habitat after a thorough examination, officials said.

Ashok Kumar, Sub-Inspector of Agra, said: "Some of the workers had gone home and when they returned, one of them almost stepped on the snake. Luckily, no mishaps occurred and when they contacted us, we were able to get in touch with Wildlife SOS who came and got the whole rescue done very quickly."

Kartick Satyanarayan, co-founder and CEO of Wildlife SOS, said rescuing the huge snake was not an easy job as it was surrounded by a large crowd, who wanted to catch a glimpse of it. "We are very thankful that the authorities reached out to us in time before any untoward incident could take place. The police officers helped in controlling the excited crowd while our team focused on the rescue operation."

Baiju Raj MV, Director Conservation Projects, Wildlife SOS, said the python might have wandered out of the Taj Nature Walk green belt, which is home to a variety of wildlife species. "Although non-venomous, a python's bite can be injurious, so one has to be careful while carrying out such rescue operations. We have professionally trained rescuers who are experienced in handling snake rescues."