Seven-year-old Jazmine Barnes was shot dead in Houston while riding in a car with her three sisters and her mother. 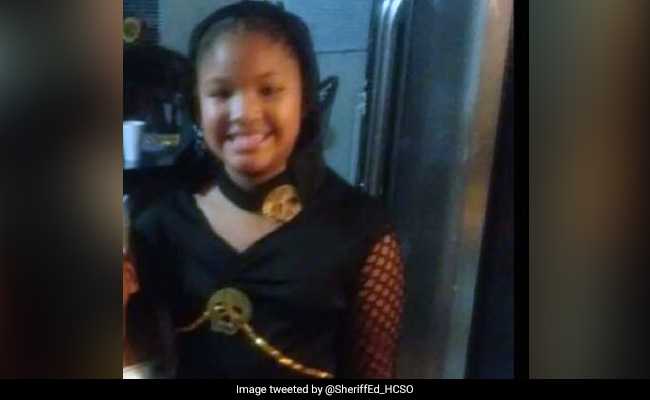 Texas authorities have charged a man in the fatal shooting of a black 7-year-old girl, whose death captured national attention and sparked a manhunt for the killer.

In a statement early Sunday, the Harris County Sheriff's Office announced that 20-year-old Eric Black Jr. was charged with capital murder in Jazmine Barnes's death. He was identified as a suspect based on a tip, police said, adding that Black later admitted he was involved in the shooting.

Investigators are chasing leads that could result in more suspects being charged.

The break in the case comes one week after Jazmine was killed in Houston while riding in a car with her three sisters and her mother, LaPorsha Washington. A gunman opened fire on the vehicle about 7 a.m. on Dec. 30, injuring Washington and fatally wounding Jazmine while causing glass to rain down on the girls.

Police said in the statement that they do not think Jazmine's family was the intended target and that they may have been shot at "as a result of mistaken identity."

"All evidence gathered so far in the Jazmine Barnes Homicide case supports investigators' strong belief that she and her family were innocent victims," the department tweeted Sunday.

Jazmine's death was publicized in part by the efforts of activist Shaun King, civil rights lawyer Lee Merritt, who represents the family, and numerous celebrities. Merritt and King offered a $100,000 reward for information leading to the suspect's arrest, and King has continuously tweeted out updates in the case to his 1.1 million Twitter followers.

Many, including Merritt, speculated that the crime was racially motivated based on early witness accounts of the suspect - who was described by authorities as a "thin white man" in his 30s or 40s.

Police in their statement did not immediately identify Black as the suspect. Merritt also identified 24-year-old Larry Woodruffe as the second suspect in the case, though police have not named him.

Merritt told The Washington Post on Sunday that he believes Woodruffe is also black.

"The family is still really grateful that it seems law enforcement has identified the shooter," Merritt said. "However, all the information up until yesterday has been that the shooter was an older white male in a red truck, that came from not only one of the victims, 15-year-old Alexis, but from an eyewitness nearby."

He added, "We had at least four independent witnesses who believed the shooter in this situation was a white male ... to learn that it wasn't isn't disappointing, but it is surprising."

Alexis Dilbert, Jazmine's 15-year-old sister, told ABC 13 in Houston after the shooting that she saw the shooter's face. Washington, the mother, told reporters that the shooter was a white man with blue eyes who was so skinny that he looked "sick."

Officials also released a video of a red pickup truck that they believed the shooter was driving.

In a Sunday tweet, however, officials said the investigation into Jazmine's killing had taken a "new direction." Although it wasn't immediately clear what "new direction" meant, police said they would hold a press briefing on the case Sunday afternoon.

On Saturday, hundreds of people gathered at a Walmart near the street where the shooting occurred to rally for Jazmine. The protesters called themselves soldiers in an army crusading on behalf of the slain girl, according to the Associated Press, in what has been a continuous outpouring of support for her family.

Some wielded signs that said "Justice for Jazmine," mirroring the hashtag used by advocates and police alike to publicize the killing.

Earlier this week, Houston Texans wide receiver Deandre Hopkins tweeted that he planned to donate his check from Saturday's playoff game to help Jazmine's family with funeral costs. A GoFundMe set up for expenses related to the girl's death had accumulated more than $77,000 as of Sunday morning.

Harris County Sheriff Ed Gonzalez said in a statement that he was grateful to those who provided tips and assistance in their "work to get justice for Jazmine.

"Our work is not finished, but I believe the people of Harris County can take comfort in knowing we have made great progress," he said.

(Except for the headline, this story has not been edited by NDTV staff and is published from a syndicated feed.)
Comments
Jazmine BarnesHate crimeUS hate crime