In Viral Video, Man Asks Cop "Why Hit Me?" As Daughter, 8, Breaks Down 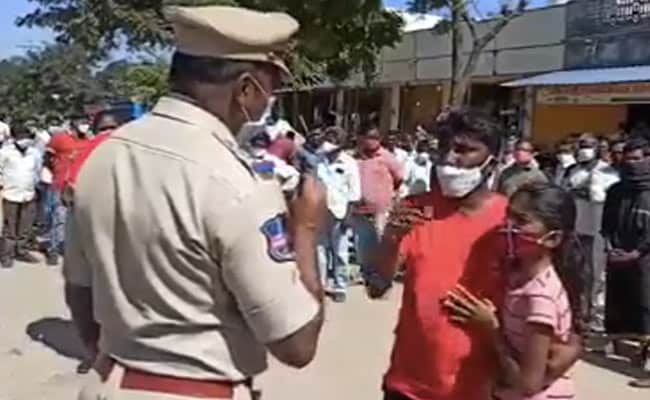 No video is available of the alleged assault itself

A Telangana man has alleged he was assaulted by a policeman in Mahbubabad district on Sunday.

Videos of the confrontation between the two have been widely shared online, and show the man (holding on to his eight-year-old daughter) in heated discussion with a senior police officer over a Sub-Inspector who, he claims, slapped him after stopping him for not wearing a helmet.

No video is available of the alleged assault itself.

The videos shared online show passers-by stopping and offering support to the man - identified as Srinivas - in his argument with the police, but the are shooed away by the cops. Undaunted, more people later gathered to support Srinivas and his protests against the police.

One of the videos shows Srinivas (in a red t-shirt) arguing with the police officer. A small crowd of people stand around Srinivas, seemingly held at bay by a few other policemen.

Srinivas and his daughter were reportedly going to buy vegetables when a police constable stopped him for not wearing a helmet. Sub-Inspector Munirullah intervened and allegedly slapped him in front of his daughter.

"You can fine me... raise a challan... but why should you hit me?" Srinivas is heard asking in the video.

Proud of this #BraveCitizen who stood up to question arrogance of & violence by man in uniform; citizens deserve respect & dignity; fear cannot be the tool for policing; how many of these policemen can question a political VIP for similar / greater offences? @ndtv@ndtvindiahttps://t.co/VAcK4aaMIa

The young girl looks visibly disturbed by the developments and breaks down a few times. Her father reassures her: "We have not done any wrong, don't worry."

The daughter's version of events was recorded by a local in another video.

On camera, she says they were stopped and her father was scolded for not wearing a helmet. She also said his bike keys were confiscated and, when her father protested, the Sub-Inspector slapped him.

Social media comments on the video have slammed the incident as a case of police arrogance and excess. Some compared it to the initial days of the Covid-induced lockdown when policemen reportedly turned unreasonably violent against citizens in their zest to enforce the rules.

That Srinivas stood his ground and questioned the alleged police excess also came in for appreciation.