The overcrowded state-run bus had swerved off the road and hurtled down a hillside into a gorge Tuesday, killing 57 people and injuring 28 others in one of the worst highway tragedies in recent memory. 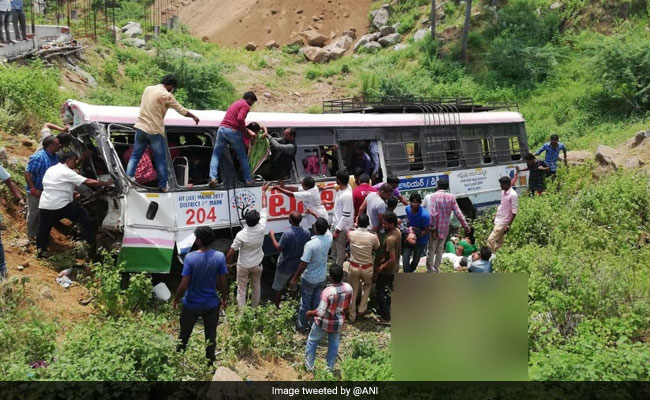 The accident occurred on the ghat section of the road near Shanivarapet village near Hyderabad.

The driver of the bus that plunged into a ravine in Telangana killing 57 people was conferred the best driver award by the government only last month, officials said Wednesday even as the death toll from the accident rose to 58 with a woman succumbing to injuries.

The overcrowded state-run bus had swerved off the road and hurtled down a hillside into a gorge Tuesday, killing 57 people and injuring 28 others in one of the worst highway tragedies in recent memory.

The accident involving the Telangana State Road Transport Corporation (TSRTC) bus occurred on the ghat section of the road near Shanivarapet village some 200 km from state capital Hyderabad.

The TSRTC has submitted a preliminary report to the government indicating that the accident happened when the driver, who was also killed, either lost control while trying to avoid a collision with an oncoming vehicle or negotiating a sharp downhill curve, a corporation official said.

A police officer said the number of those killed rose to 58 Wednesday when a woman succumbed to injuries during treatment. Twenty seven people are still undergoing treatment in hospitals in Jagtial and Karimnagar districts and the condition of at least three is serious.

All the bodies were identified and handed over to the families after post-mortem and inquest, Jagtial Deputy Superintendent of Police Venkat Ramana told PTI.

Some of the victims were pilgrims returning to Jagtial from the temple town of Kondagattu after offering prayers at the famous Hanuman temple.

The deceased were from nearby villages and most were daily commuters, he said.

Some of them died due to suffocation, while others succumbed to head injuries.

A case has been registered and investigation is on, Ramana said. He said experts will examine the vehicle to ascertain the exact cause of the accident.

The bus depot manager was suspended on Tuesday, a TSRTC official said, adding the vehicle was still in the gorge.

He dismissed media reports that the driver had taken the dodgy shortcut to save fuel, insisting "it is the regular route, and the driver was also regular".

The official said bus driver Srinivas was not only presented the best driver award last month, but was also earlier rewarded for best fuel efficiency, which indicated his impeccable driving skills.

The officer, who did not want to be named, ruled out the possibility of brake failure being the cause of accident.

"Based on prima-facie information, a preliminary report has been submitted to the government. A detailed report will follow after a thorough inquiry," he said.

Police and TSRTC officials said around 90 passengers were on the bus against seating capacity of 54 when it met with accident.